I finally scored a 6x6 1st season after years of 5x5's and smaller. Warm weather, smalls groups of elk dispersed. Pretty standard the last few warm years. Although like others said most people we ran into coming out really didn't do well.

I shot this high on a game trail at 30 yards. i had just got up there in the morning and sat down. He and his cows walked right below me. Just like I was hoping they would based on previous visits to that spot.

Thanks. and congrads to the other guys that got one.

I am getting a antler mount professionally done this time. Where I'm going to put it is still being discussed with the wife.
Scott Yoder KD0DHP
2000 4Runner, 2.5" lift on 33's, locked, geared & armored.

Well for only the 2nd time since moving to CO I did not draw a cow tag, so an OTC bull tag it is for me this fall. I did draw a doe tag for 5th season.

Corbet said:
Well for only the 2nd time since moving to CO I did not draw a cow tag, so an OTC bull tag it is for me this fall. I did draw a doe tag for 5th season.

I guess I'd better get the cameras out and start scouting for bulls.
Click to expand...

I feel your pain! I didnt even get a muzzle loader tag!

Looks like 3rd season otc bull will be my plan....
KØUBN
Kevin
TLCA #3007
Northside!
I'm the God-fearing, gun-toting, American flag-waving, conservative you were warned about!

Jacket;285238 said:
Welcome. Lots of "northsiders" here in the club. We're known to have some of the strongest, coolest and most awesome club members.
<snip>
Click to expand...

We didn't get our Muzzle deer tags. We didn't expect to get our muzzle elk 2 years in a row. So it's 1 season Bulls for us. Fine by me. The heat and flies were tough in Sept. last year.

Anyone have any luck? We froze our butts off but enjoyed taking the kids out on their first hunt. Snapped this after a 2 mile hike in single digit temps:

The 3 of us came home empty this year. This picture says it all for trying to get to our trailhead in the Flat Tops. It’s unfortunate because we had called in multiple bulls weeks earlier in Sept. so we were expecting a productive year.

I was blazing trail for a while but would have a hard time finding the trail. Then you would hit rocks. Which was scary because you had to hammer it to keep momentum thru the deeper sections out in the open areas. Then I realized even if I would have made it to the trailhead I wouldn’t want to hike around and hunt in that deep snow. Plus the elk probably moved out anyway. So we turned around went to our old spot by No Name. Saw a few elk and a few bulls but could only get one shot off after hunting there for 4 days. We spent the last day wheeling as far up the transfer trail as possible. Everyone had chains and couldn’t understand why I didn’t. Made it about halfway to Coffee Pot. Again if there weren’t any tracks you would lose track of the road. So that just turned into a fun snow run. Had to winch a few times to get turned around and back out.

I’m out of burger and will need to look at a left over cow opportunity somewhere I guess.

Empty here as well. Scouted hard during first season so that I'd be ready for second. Saw 10 cows but no bulls. Would have easily had 3 cows if I only had the right tag.
Brett

How are people doing out there?

Dan and I hunted hard for the 1st. several days of 1st season rifle. Seeing no legal bulls and few elk. Lots of people on UTV's at the trailhead parked next to the JadeRunner. We could spot them at trailhead from high points with binoculars. The hunters we talked to were all from the east coast.

Dan finally got a small bull Tue. am. up high. Then I connected on a medium size bull Tue. night. It was sad that this was the lone bull with 30 cows. Basically the bigger bulls must have been shot already. They were feeding in a remote meadow 4 miles in. I was in the area when I heard him give out a small bugle and was able to get to him just before dark.

We had a guy from New Jersey shoot a small bull from the cliff top where the road goes by at 700 yards. He said he had some kind of bench and special setup. I saw them coming out at night with the meat when I was returning to camp. Then a few days later we saw ATV tracks going past the sign and into the wilderness on the foot trail about a mile which was as far as they could go. Thanks goodness a tree and rock blocked their way at least at that point. I assume it was them at night trying to shorten their hike out with their meat. That was unfortunate.

Everyone was long gone from the whole area the last few days when we were packing out. The snows storms were coming in the next few days evidently so we got lucky to skirt the snow this year. 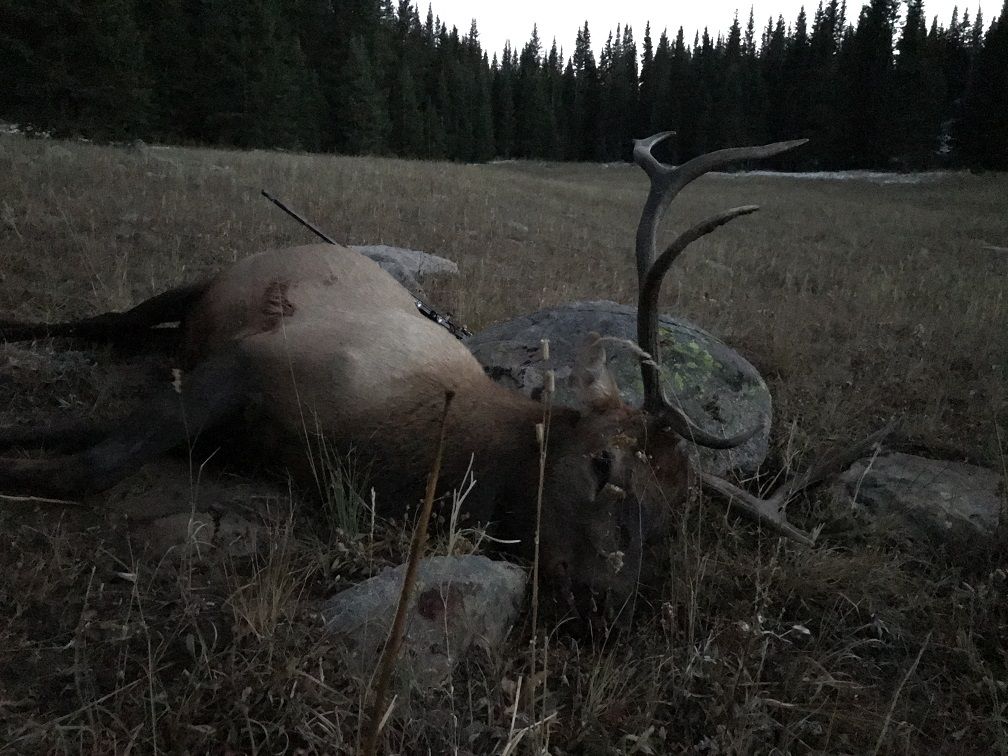 Come to find out, there was over 300 OTC tags in the normal GMU. Why I didn't draw is beyond me.

On that note, I'm considering a 4th season hunt if the weather holds. It's generally a 6 mile hike but they are always there if anyone wants to jump in.
Travis Hurley– Owner/ C.E.O.
Outer Limit Supply | Main: 720-987-4202
Est. 2014 | Littleton, Colorado
www.outerlimitsupply.com | travis@outerlimitsupply.com