@Shuksan was incredible enough to find us a 10,000 lift for our space. A very nice couple in wash park bought a home with a nearly new bendpak 10,000 lb lift in the garage. They want it gone and now here we are! The logistics are still being worked out. It sounds as if the day to disassemble and haul it out will fall on a Sunday either this month or in January(on sundays the parking lot directly behind their garage is nice and empty, plenty of room to maneuver @J1000 20ft flatbed trailer. We’re trying to assemble a team of about 8 guys to help get it down and get it from wash park to Englewood and get it installed. I will edit this post with dates as soon as they are finalized.
We’re looking for an engineering team lead who ideally has experience with dis/assembly of car lifts, can direct the morter repair of the concrete holes left behind in the current install location and help us confirm that the depth of our concrete pad is suitably deep for installing this lift.

I got you homie! (beer drinking team lead)

Not sure what anchors you had in mind for install at your spot, but you could always bust out small areas of the pad and set threaded J-hooks with new concrete. We can chat about that some time.

I'm in if I'm around. Covid keeps me around! Hilti makes some anchors that should do the job. Concrete should be plenty thick but never hurts to find out for sure with a small pilot hole. I'll talk to our concrete engineer and get minimum thickness for this application.
Adam
01 4runner, lifted with armor.

I can help with any grunt work you need, and generally keep my Sundays free. Feel free to reach out if you need extra hands.
Josh
'97 FZJ80 "Earl." Factory locked, Tired 1.5" OME (Soon to Be Dobinsons), ARB front Bumper. Cup Holders.

I’d be willing to help.

Looks like we'll probably need a forklift to lower and then raise the beams. Anyone have access to one?
Jimmy
KD0QLU

Shuksan said:
The cross beam on top?
Click to expand...

Were thinking of using it (along with some rigging) to get the heavy posts from a vertical to a horizontal position, and vice versa at the new location.
Daniel Chase Powell
KBØDCP
1997 Lexus Lx450

DanielChase said:
Were thinking of using it (along with some rigging) to get the heavy posts from a vertical to a horizontal position, and vice versa at the new location.
Click to expand...

I see. I assume you found this:

So exciting!!! A lift is a wonderful tool and makes most every wrenching session better as the vehicle can go up and down versus you having to do the up and down. You will really appreciate the convenience. The 10K lift you guys are getting has ALI Certification and will handle pretty much any Toyota (or other manufacturer) vehicle in production today. It is super exciting to see you guys doing this. I hope that I'm not messing up your planning thread with this post. Hopefully it generates some excitement and gets you some more volunteers.

I have been around to see a couple of two post lifts installed. In both instances the installation was hired out. I looked for but didn't find how much it cost me to have my lift installed a few years ago - but it was very reasonable and worth the peace of mind. A guy I work with installed one on his own in a long weekend and said it was time consuming but easy. Wow, it has been 9 years since the lift was installed at AirRandy's.

The installation process is documented out on the interwebs quite a bit; this is one article from a distributor that does a good job of covering the high level basics. The installation manual for the lift you guys are getting has been posted in this thread and it covers everything you would need to know to complete the install successfully. Even if you are a read the instructions only when needed kind of guy, in this case I would encourage you to make an exception and do it before starting the work.

The following is a recollection of my observations (along with a few inspirational pictures) on how a few of the subjects discussed above were done.

Moving lift columns around seems daunting because they are so large. At Randy's a a Kubota tractor bucket was used and at mine it was a small forklift. In both instances the posts were suspended by a strap that was placed closer to the base of the column than the center. There is a balance point and that is where the strap should go. While "heavy" equipment was used in the installs I observed, I have read that they can be moved with an engine hoist. Even with the heavy equipment, the columns were not ever very high off the ground, just high enough to clear the trailer and then once clear, lowered to about a foot or so off the ground as they were moved. Here a couple of photos of where the strap was placed for the columns of my lift. 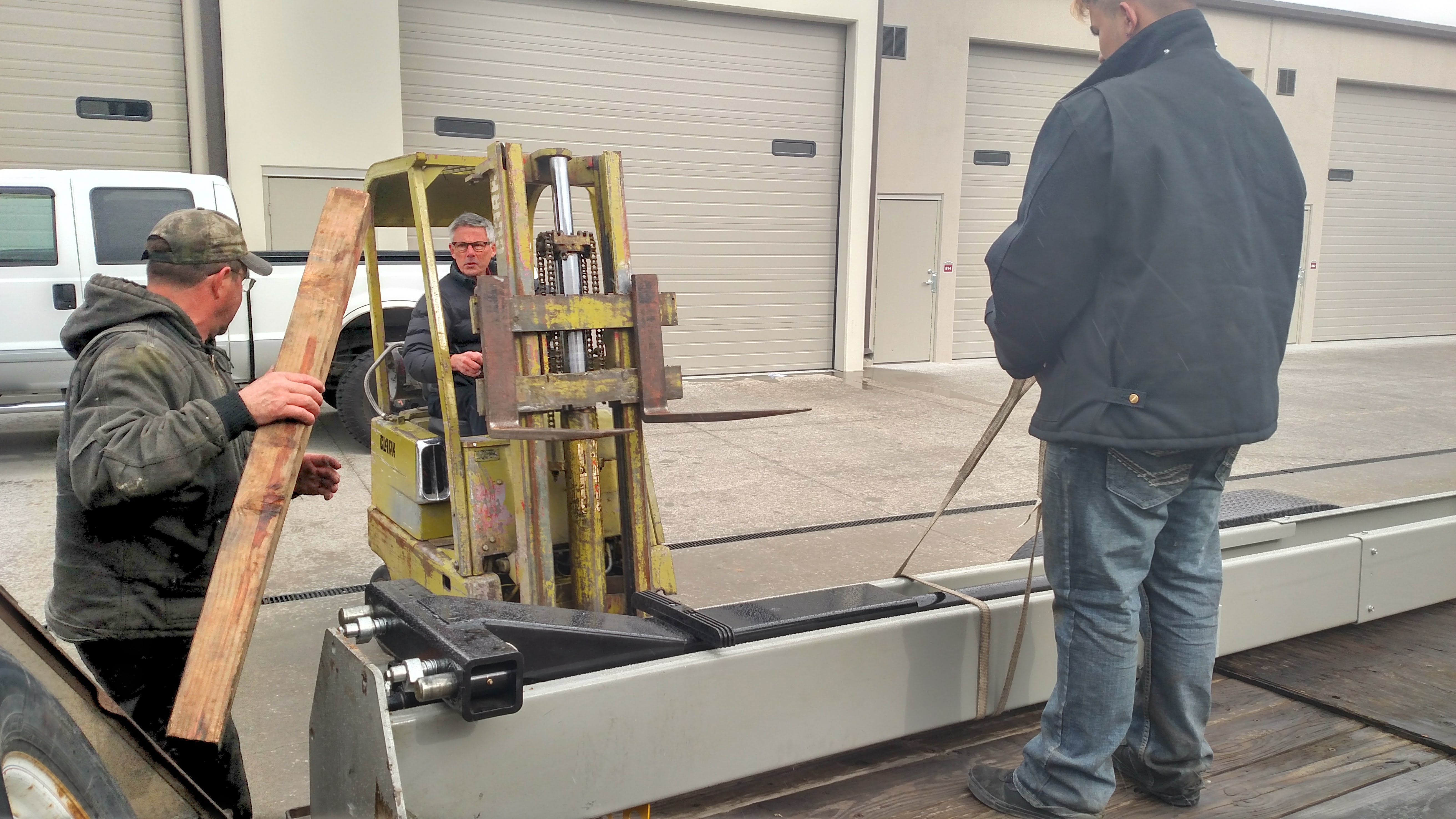 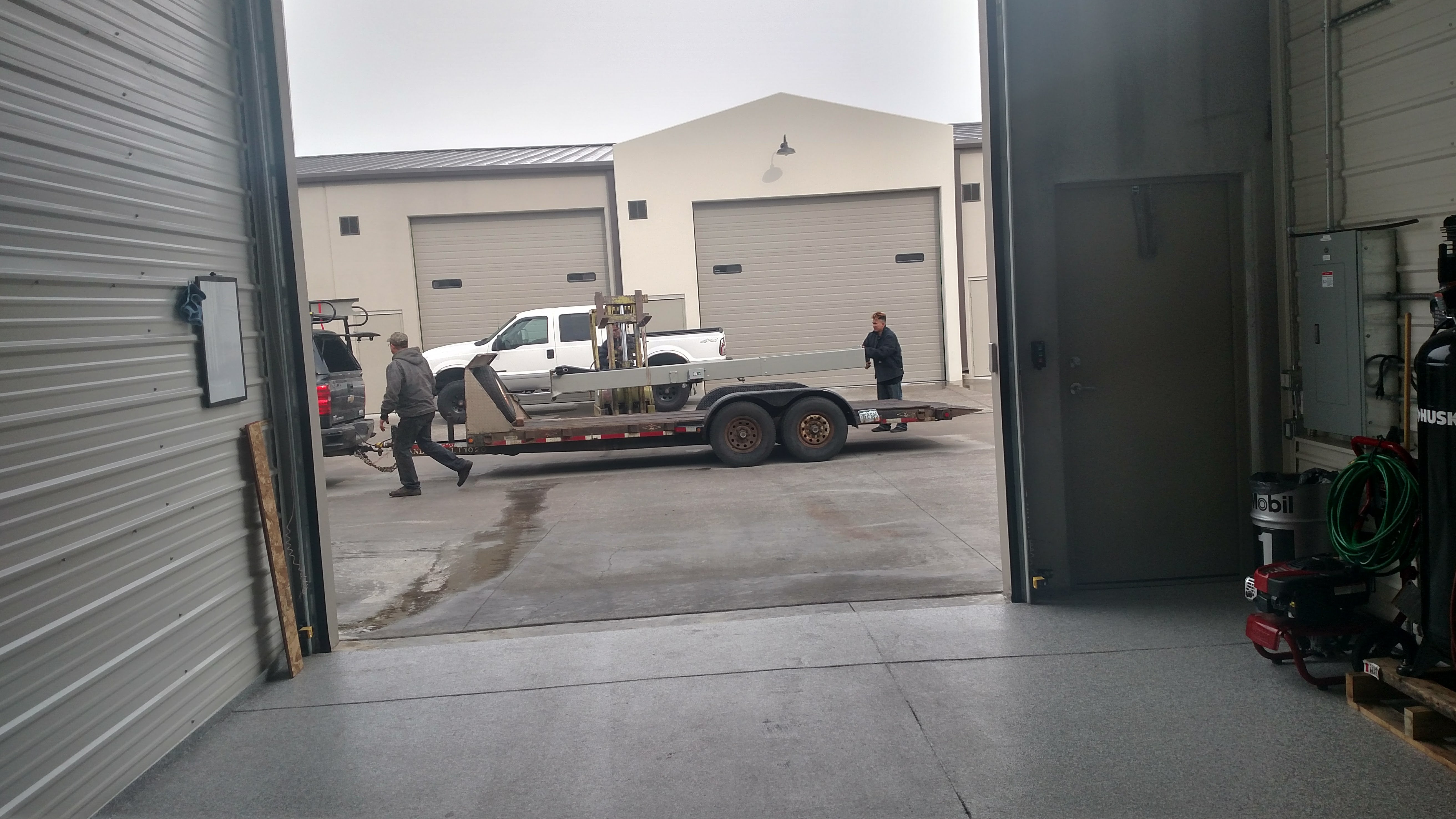 Standing the lift columns up in their final position. For Randy's install, the installer just walked it on up by himself. Keep in mind, he does this day in day out and is familiar with the process. For the lift install in my shop, the installer and his assistant did it together. They did use the forklift to start to process of getting it leaned up. I'm sure with a few guys working together - they should stand right up. Once they are upright, they can be moved into the final position easily, by carefully sliding an inch or so at a time. Here are the columns being stood up. 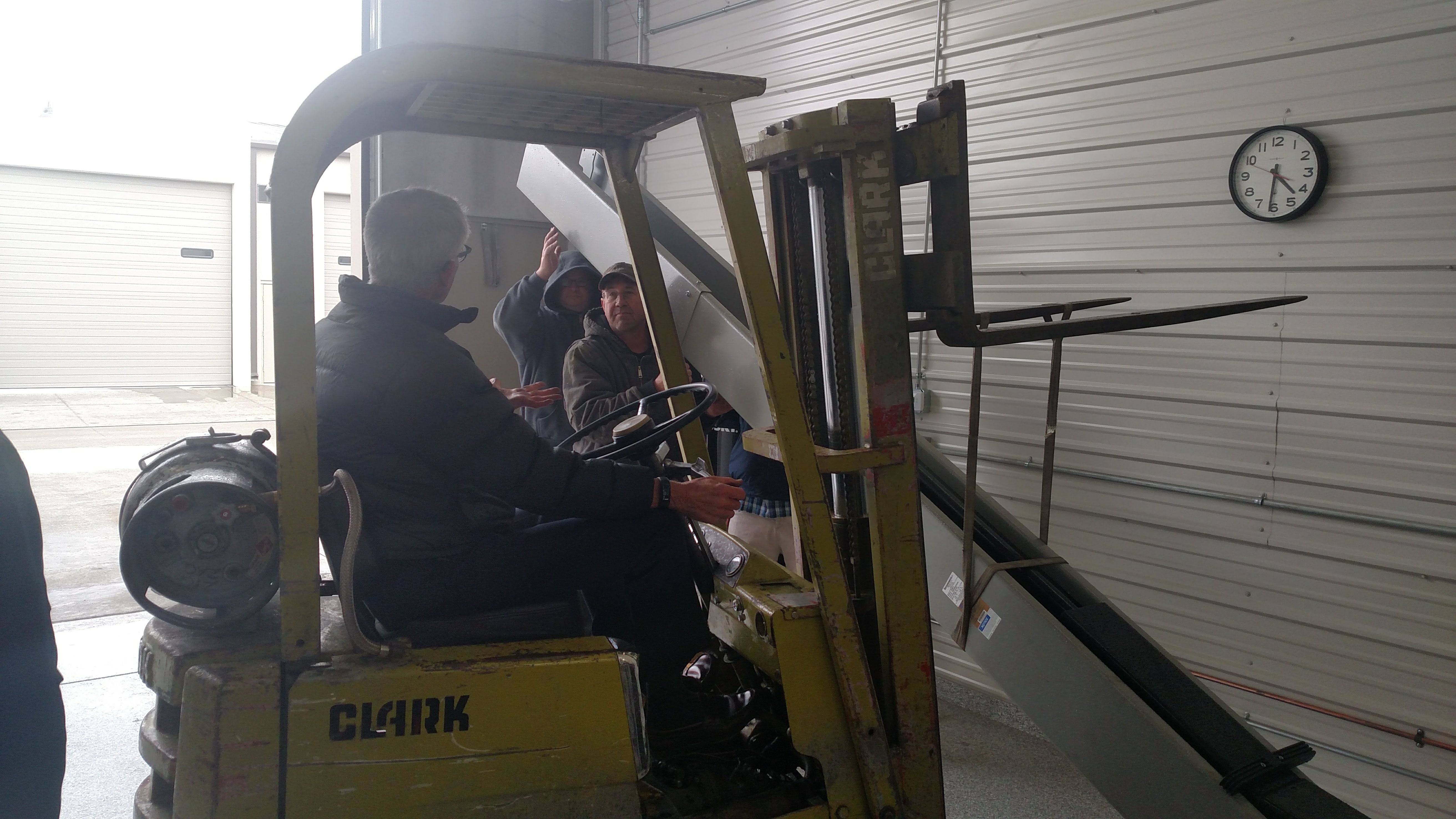 The columns are really the only large pieces of the lift, the rest of the parts take up very little space. 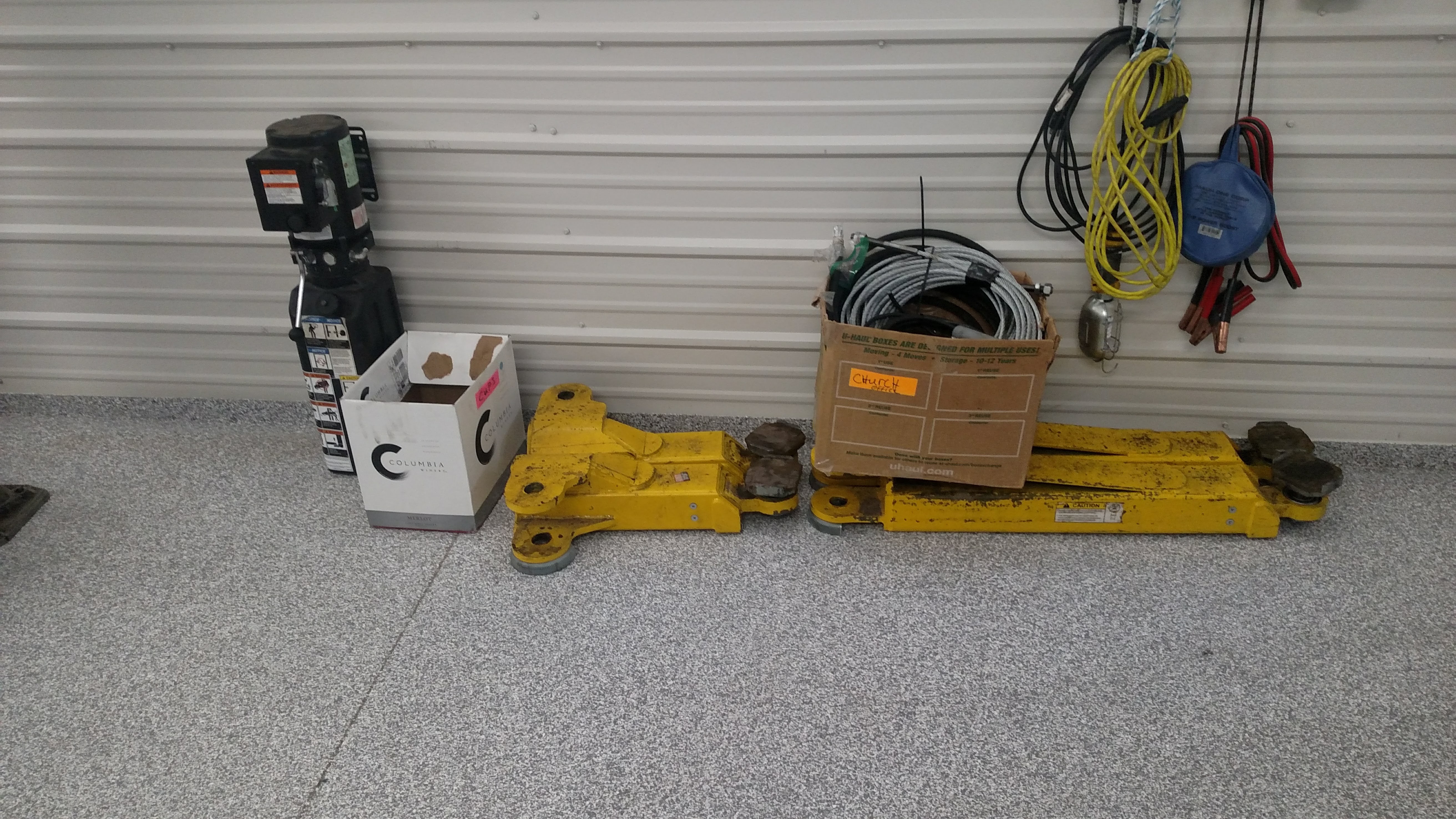 As mentioned above, lining everything up before anchoring the columns is important. Here is a shot of chalk lines that my installer used. In Randy's installation the installer had a fancy transit type set up. 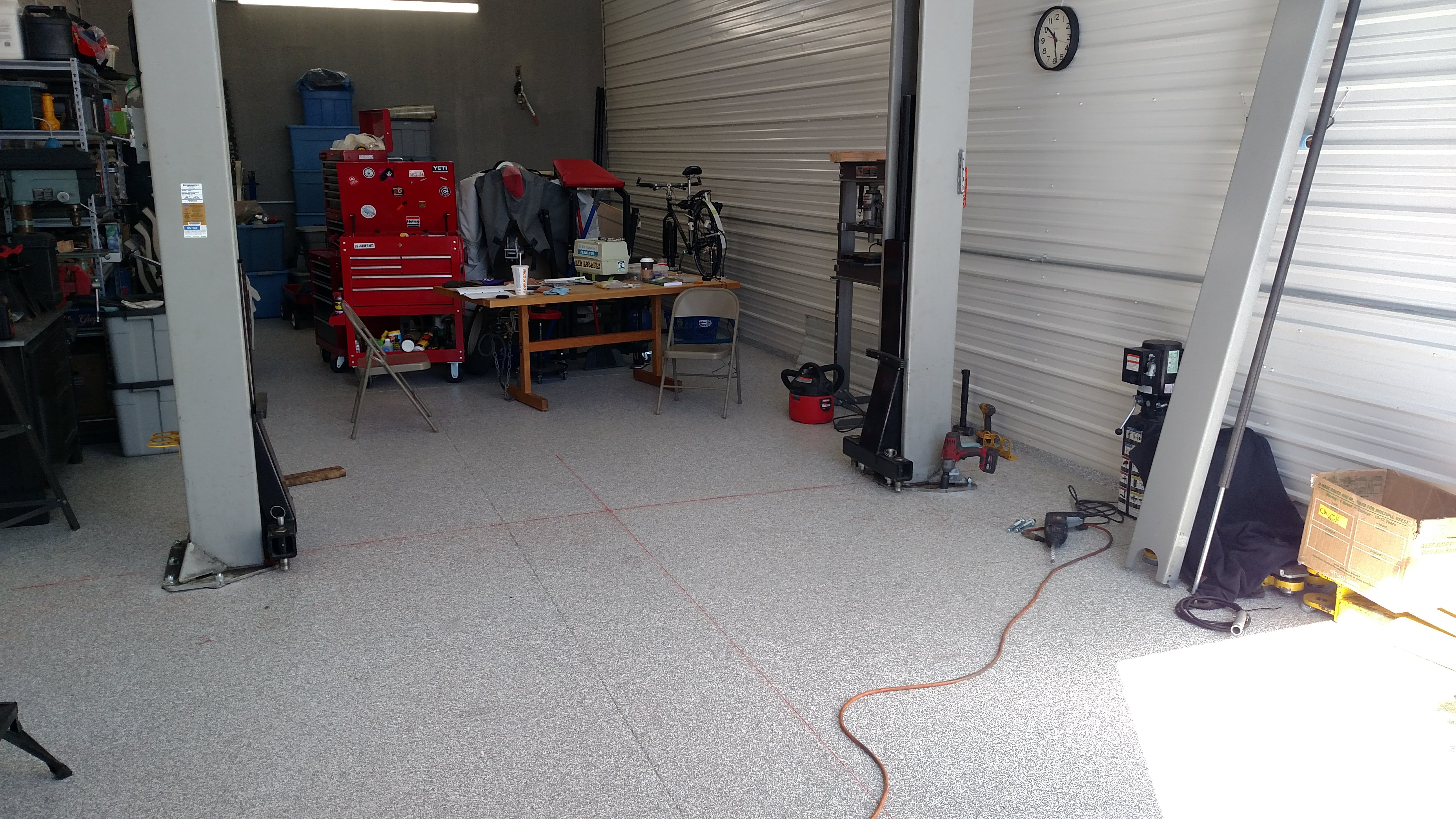 To get the cross bar on the top of the lift in place, Randy's installer used two tall step ladders and my installer had a scissor lift. 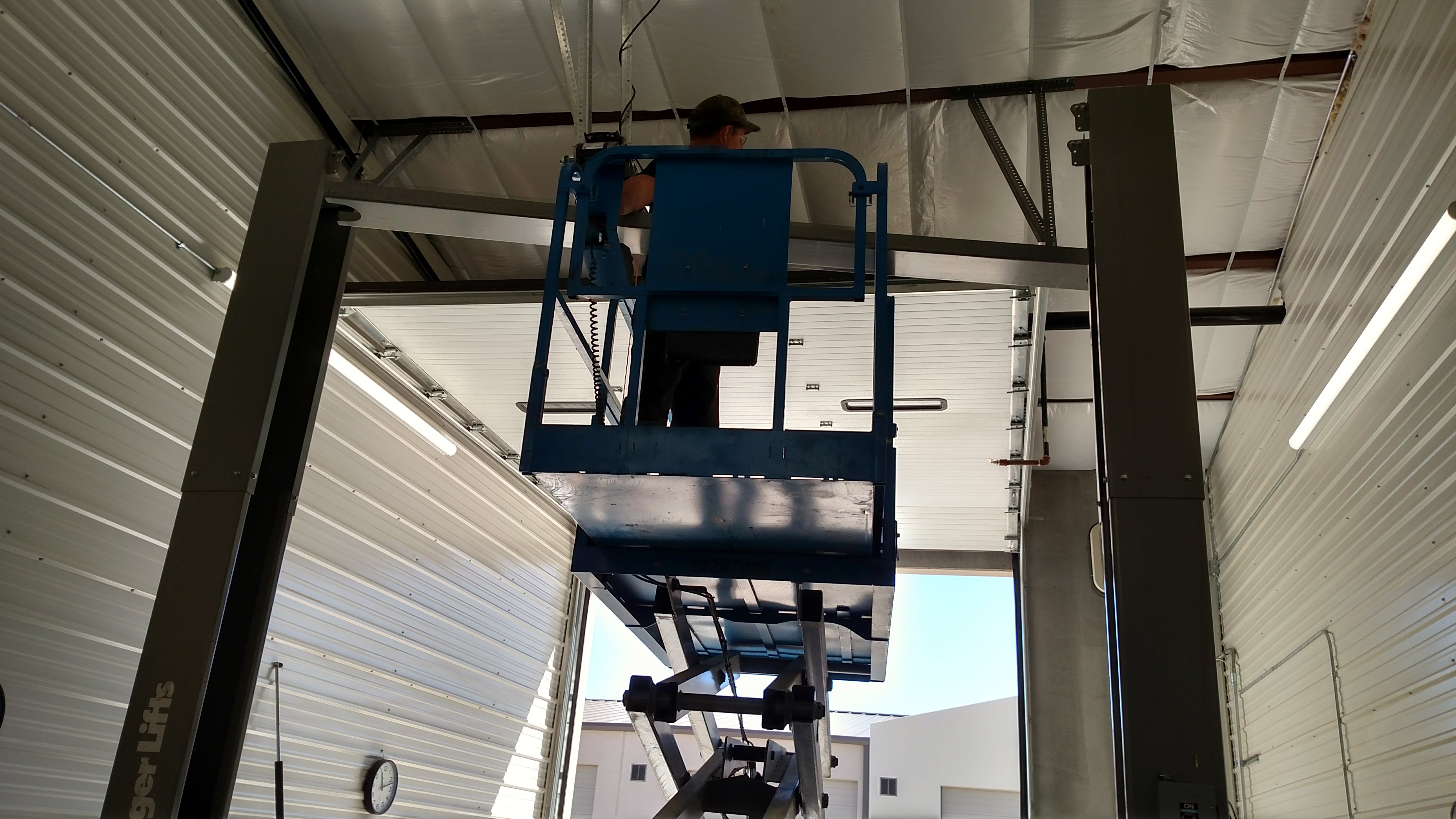 Finally, the end objective, the lift in use for the first time. 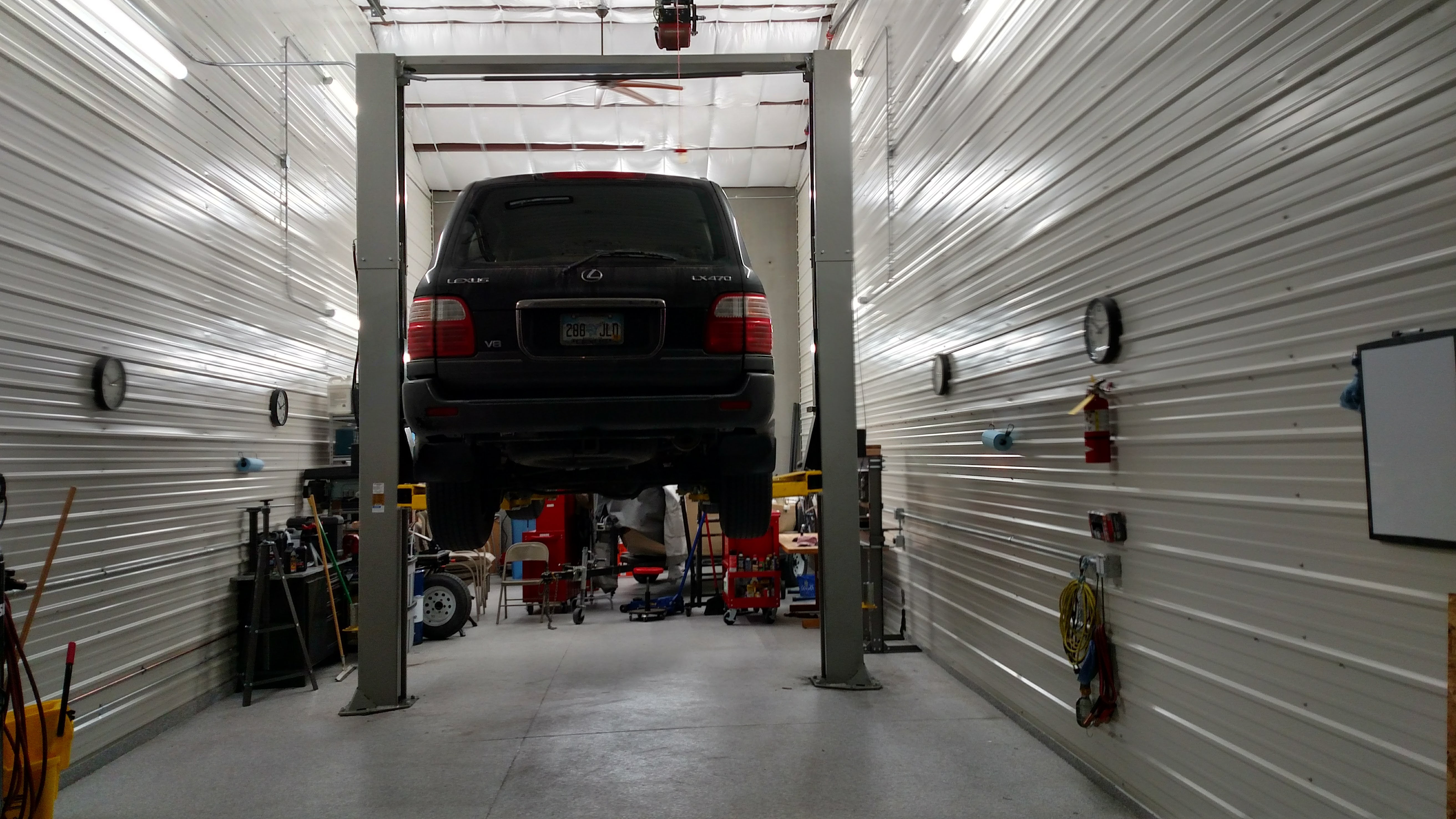 I have a small tractor and trailer that someone can grab from Erie if helpful!

Not sure I’m able to commit to specific day.
Brett

I love this! Go dudes!

Yeah this is cool to see it come together... Chase did you get any building drawings with your lease? Something that shows the thickness of that floor slab? That would probably be my concern here... I am guessing you'll need to cut a couple holes in the slab, then dig down and pour some deeper caissons. If you can make a couple templates with hole spacing right then you could sink J-bolts through those, otherwise plan on getting the hammer drill to add red heads or whatever expanding bolt they provide. It sounds like @Cruisertrash may have done this before...

Then again your slab may hold it just fine? Might ping your favorite Sleeoffroad employee to ask Christo what they did below the lifts on their shop buildout, as you know that was done legit. I'd just hate to see that slab crack and a truck tip over, that's all.
82 fj40, 87 fj60, 06 gx470

Actually the floor thickness spec is not that thick. Probably 4" but I would think that floor is probably 6". Our shop is 8". The more important issue is how far the holes should be from a seam in the concrete. The lift manual should spec out the concrete specs. Just search for the lift manual.

Essentially drill a hole and see how deep it is.

For the removal, not rocket science. Essentially remove the arms, remove the top and undo cables (take pictures) and lay the uprights down. Take something to seal the oil container. Install is reverse of take apart.

Fixing the concrete might be an issue. Normally you can not get the bolts out. Either pound them in further and fill holes or cut them off with a grinder.
Last edited: Dec 10, 2020
Christo Slee
KØSLE
www.sleeoffroad.com

Man, I'm jealous. Some day I hope to have a lift.
Tyler - KE0ZTU
IG: broverland69