thanks guys! I'm diggin it, in the daylight it's a little on the light side but as soon as the sun goes behind a cloud it's the exact color I was aiming for... kind of fun.

Today I switched gears and made something out of plastic for a change. Main decision criteria being something that is fast & easy to work with, non-conductive, and I already had it laying around. So this old fairing piece seemed to fit that perfectly. 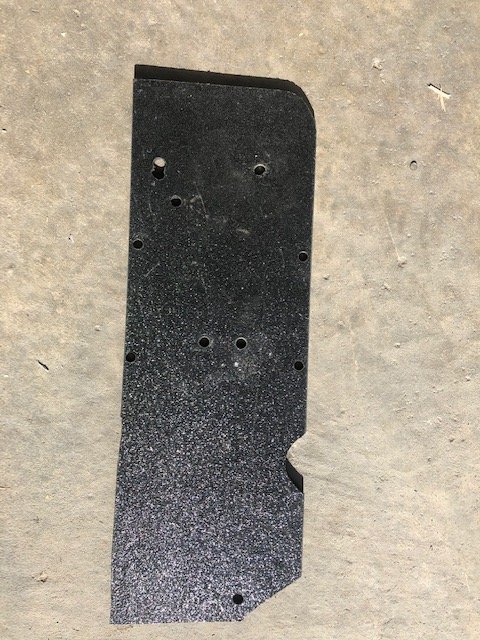 I have the same Blue Sea ACR switch in the GX, also used the same one in the 100 series, they are pretty tried and true at this point. The little 50 amp circuit breaker is for a future power run to the back cargo area, provides a quick & easy way to kill that when needed, and also some protection if something gets pinched or something. That short lead is basically jumpered to the lead coming from the 2nd battery, sharing the same terminal. 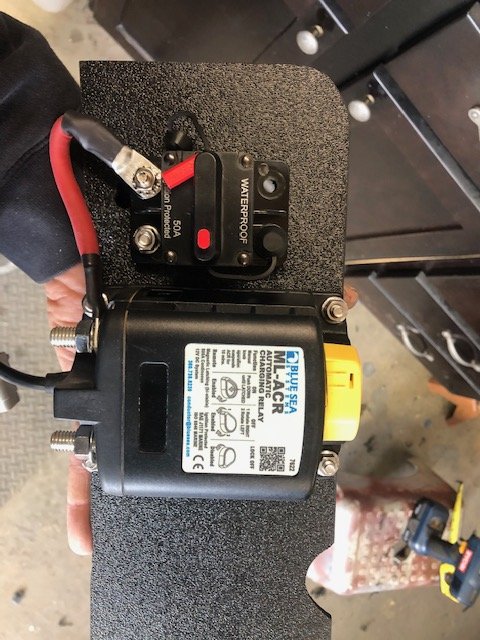 Looks like Auto Zone bought the Die Hard brand... I went in there expecting to pick up a second "Autocraft" AGM and instead walked out with a Die Hard Platinum.. I am sure it is the same thing. Took me a while to wrap the loom around all the cables, but in general it came out alright I think. I'm tempted to do it again though with longer cables, we'll see if it bugs me too much. the better move would be to bury it all inside the fenders, behind the carb fan, behind all the hinges, behind the washer tank.. but dangit that stuff took forever to bolt up again, just couldn't bear to undo it all today as it seems like it's getting darker/colder faster than ever now.

I definitely need to get a longer battery cable to connect the second battery to the switch, for now it's going up and over my coolant overflow which is probably not the best form... we'll be ok though for a while, I'm probably low on coolant anyway so not a lot of action happening in the tank. 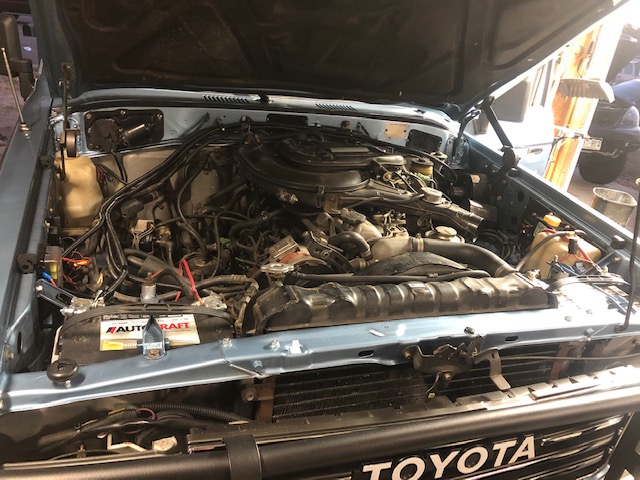 Here you can see the plastic panel in action.. 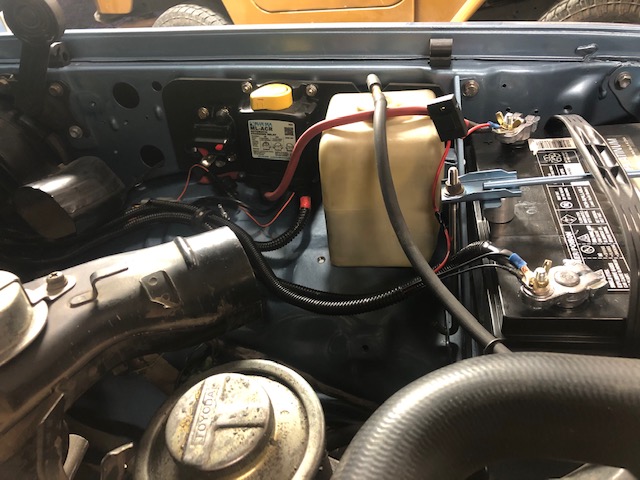 The good stuff is inside the cab though. I ran wires into the bottom of the Tuffy console and installed a switch bezel in there. I've got a lead coming from battery #1 to one of the volt meter/charging ports, and a lead from battery #2 going to the other charging port, both fused obviously. Next to them is the Blue Sea remote switch... Matt at Off Grid Engineering makes a plug & play harness for these, which takes a lot of the guesswork out of the wiring. So now I've got visibility to both battery voltages, and can foricibly combine or disconnect them, or just let them do their thing. 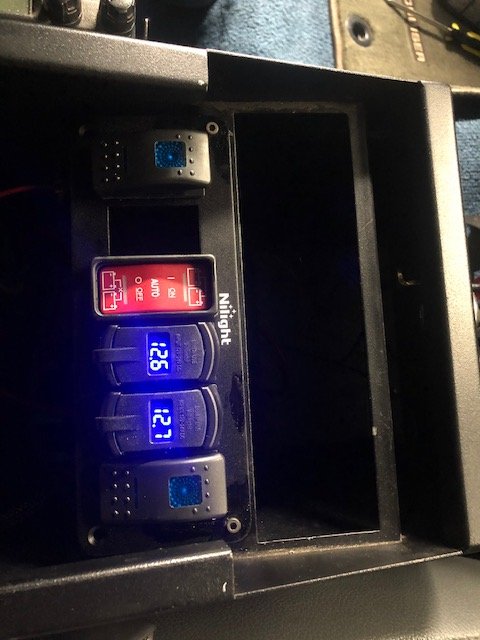 Plus I can charge my phone from whichever battery has the most juice at the time. 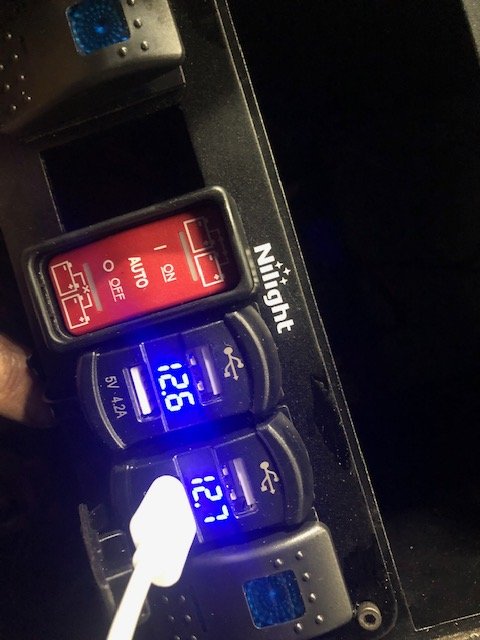 That panel has 7 slots to it... I am leaving switches in the outside ones to hopefully one day power seat heaters- my Saab seats appear to have heaters wired, I just need to figure out which ones to power up. I'll probably put a light in the Tuffy console also, may as well as I have a bunch of power running there now. I'm also thinking of switching the negative side of those volt meters, so they're not on all the time.. but for tonight I just wired it up as I wanted to see some numbers. So I've got a dual battery system now.
82 fj40, 87 fj60, 06 gx470 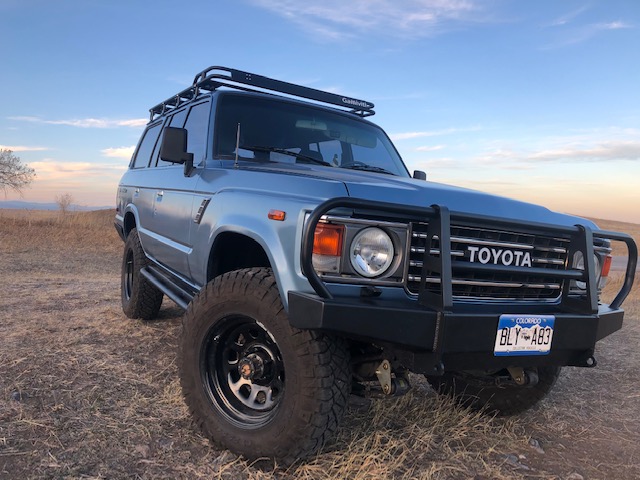 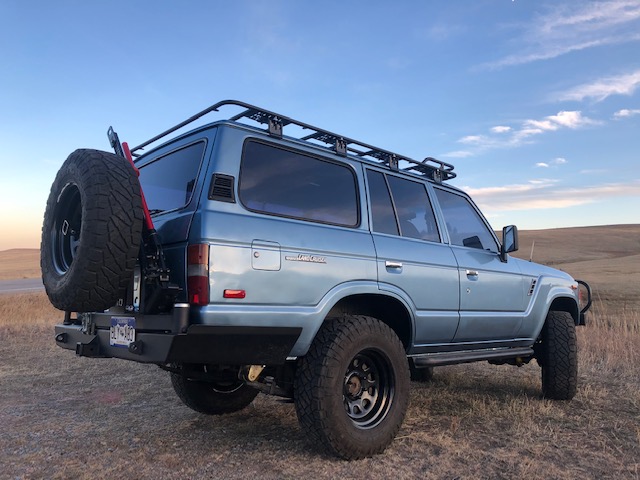 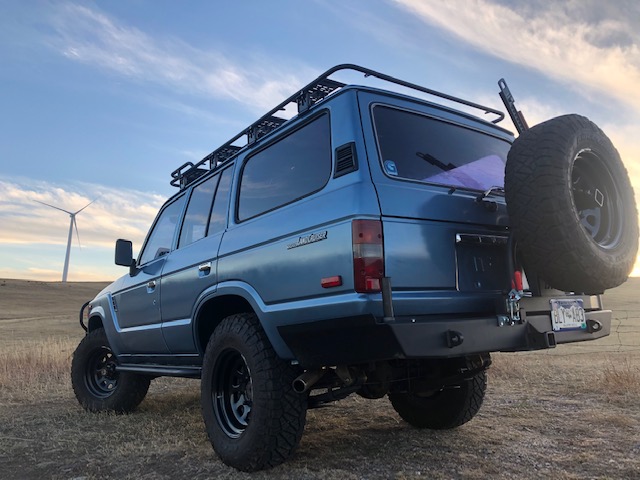 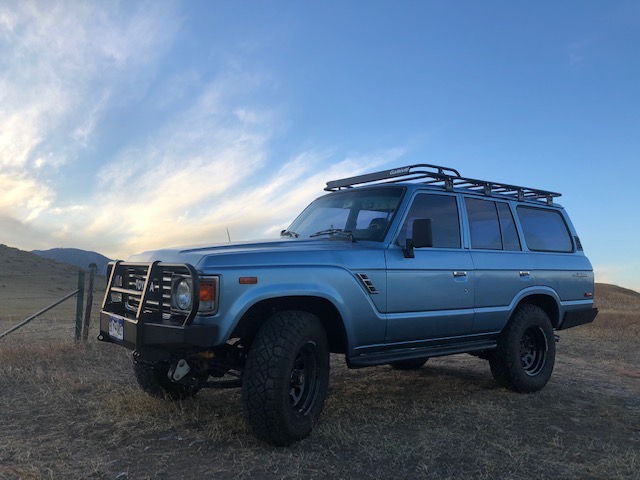 I've also discovered an electrical issue that I haven't yet resolved, though I think I've traced at least part of it to the new fuse block that I put in. But the issue is twofold. For one, I measure about a 1.0v voltage drop comparing the voltage going into the fuse block and the voltage going out of the fuse block- this is just poking around the fuse block with the multi meter. I took out each fuse indifvidually hoping to measure a jump in voltage on the remaining circuits, but no. But I am seeing 12.9 on the battery, and more like 12.0 on the stuff coming off the fuse panel. Not sure how the fuse panel would do that, isn't it just a stamped piece of sheet metal?

The other oddity is this really erradic voltage, it'll drop so low while driving that the radio will turn off (like 11.0) but then a few minutes later will be up to 13.1 nice and happy. I can watch this on the dash gauge, also with the new digital gauges, I have tried multiple gauges also and they all show the same. So this seems like a bad alternator to me.

I need a break so am going to let it sit tonight. Tomorrow I'm going to replace the wire that connects the battery to the fuse panel, and see if that does anything. I will then swap batteries around just to see if the new battery in position 1 changes anything. If I'm still into it, I've got a backup alternator on the bench here, brand new from NAPA- bought this as an interim while the 40's alternator was being rewound. So I might try swapping that in just to see what that does. What has me puzzled though is I didn't have these issues before I messed with that fuse panel, which points me in that direction. I did have an intermitting starting issue indicative of bad starter contacts, and for a while though that the extra wire to the coil clamp had solved it, but yesterday even my starting issues are back in action... now substantiated with a voltage meter in the 10's. super odd though, I just drove home with the lights on and voltage was super low like 11.5 or so, but when I shut the truck off the battery jumped to 13.1. So I don't think it's the battery, but something else is definitely pulling me down here...
82 fj40, 87 fj60, 06 gx470

Kind of a slow day here for the 60, but I think I solved my electrical issues finally. I swapped out the positive cable on battery 2 for a longer one, then used that new one to feed my fuse block off battery 1. I also replaced that fuse block with a new Blue Sea-style one that I was saving for the back... suggestion by @DanielChase. While doing so I moved one of the wires that was piggy backed on the + feed from the battery to the fuse block to its own fuse, so it's fused now and wasn't before, but still always hot as are the rest of the circuits. But now I read 12.6 on the main battery when it's just sitting there, and when I turn the key to "on" it drops to 12.5 before the starter is engaged. When starting it drops to around 11, then climbs back up to 14.3- never seen it that high. Before, when I'd turn the key to "on" the voltage would drop down to 10-11 even before the starter would engage, but then of course that wasn't enough voltage to even engage the starter anyway so I'd have to roll start it.

I think that fuse block was just bad- I can't explain how anything would have a 1v drop just by being there. Was reading last night the reviews for it, one guy posted a picture of a melted one which was a little scary... so maybe best I removed that sooner rather than later.

here's the fuse block that I removed: https://www.amazon.com/gp/product/B01MRN1H7P/ref=ppx_yo_dt_b_search_asin_title?ie=UTF8&psc=1
Here's the better one: https://www.amazon.com/gp/product/B07GBST5NX/ref=ppx_yo_dt_b_search_asin_title?ie=UTF8&psc=1
I also think a fresh new cable from the battery to the fuse block couldn't have hurt, even though I didn't measure any resistance across that old cable with the multi meter, there's likely a difference when more amps are involved... could have been some moisture inside the cable, or a few severed strands, etc. What's cool now though is when combined both batteries are reading within 1-2 volts of each other, which is the behavoir that I'm used to on these sytems. Before tonight's upgrade battery 1 was at least 1.5v lower than battery 2, even when they were combined. So something just wasn't right.

Didn't take any pictures as it was already dark by the time I got all this done. To swap fuse blocks I had to convert every wire from the push-on style to the bolt-on style, which involved dropping those little screws down into the fender multiple times. It's nice they give you extras though on the negative bus. So maybe all new crimped connections helped something also. For now, I'll take it, and feeling good that things are even better than they were. Only bummer is I had to drill/tap a couple more holes for the new larger fuse block.
Last edited: Monday at 8:25 PM
82 fj40, 87 fj60, 06 gx470 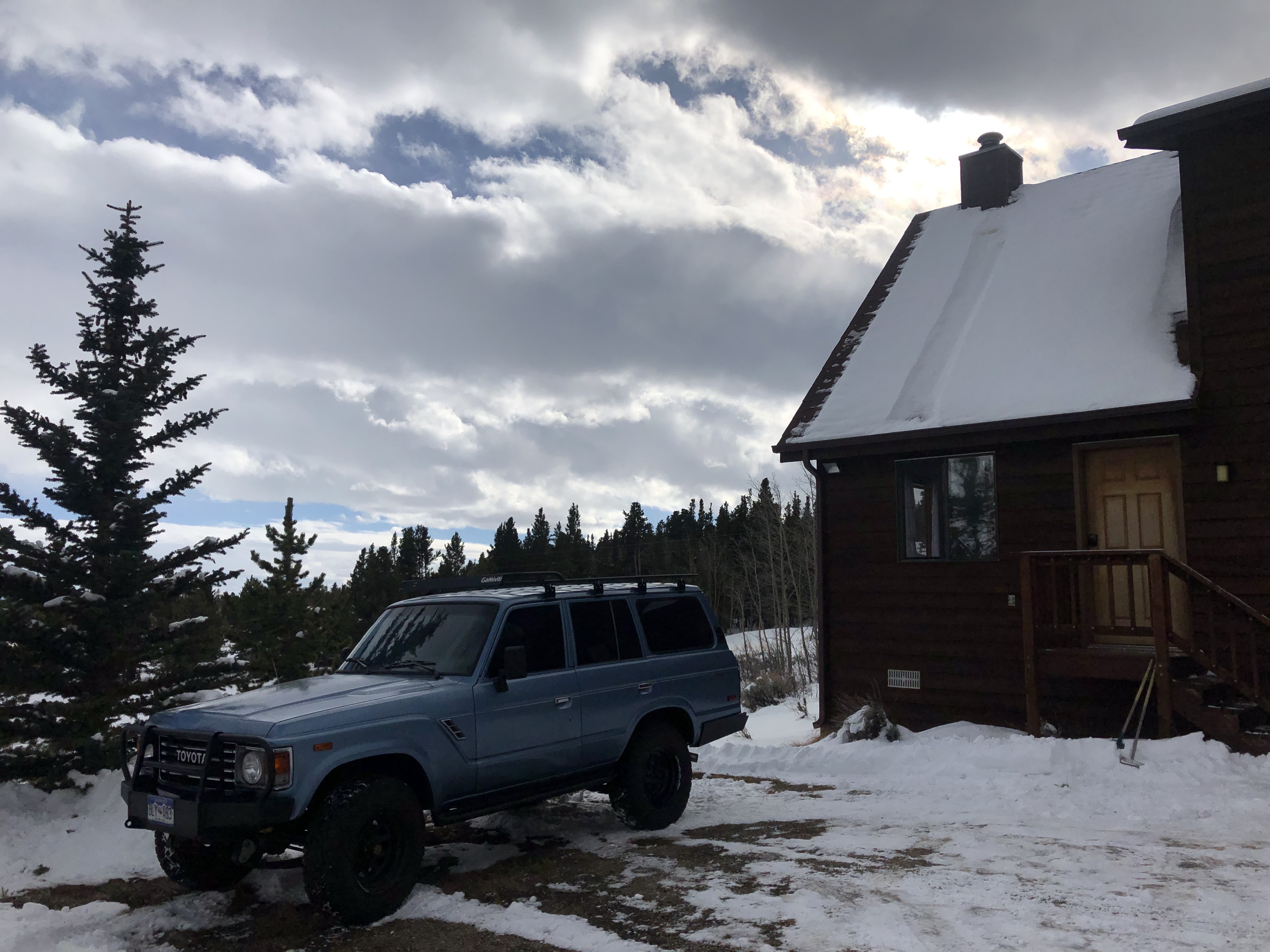