Around 2007 I became involved in the white water kayaking scene, and my current mode of transportation was a Nissan Maxima. I strapped the boats on top of that thing for a year, but eventually the plastic started shaking off the interior trim from all the wash board roads and I began my search for a mountain beater.

I talked with my dad about the situation and he mentioned he had a friend looking to sell a 4wd truck, said it was a land cruiser and is "bullet proof" but maybe I should look into the galley plug fix. Sounded like snake oil but most of the trucks I was looking for had similar caveats. I didn't have much for cash at the time, but was able to trade my atv for it and thought that was a fair deal.

I'd never heard of a land cruiser, but I do remember looking up pics of the 60 series and hoping that the one that my family was bringing up would have circular lights, cause that looked cool. Instead, it came to me in a dull gray, square light configuration.

Not having any real 4wd experience prior to this truck, I took it to a nearby lot, made sure it was driving straight ahead, and put it in 4wd. It started bucking and hopping. I asked a bunch of people if that is normal and of course they all told me to get off of pavement in 4wd, but eventually the rising sun group helped me realize I had different gears front and rear, and that was corrected. Apparently one of the previous owners had blown the rear diff, and I'm assuming the mechanic that fixed it thought that the fj60 diff is the same as the fj62 and that is what he used.

My next two off road adventures did not fare much better.

Trip 1) Voltage regulator went out and the battery boiled over while trying to make contact for help
Trip 2) Went exploring around Silverthorne, had to put it in low range, and it didn't want to come out. Low range from Silverthorne to Aurora is not fun, though I was able to keep up with traffic.

I was getting to know it better. The truck had issues, but always got me home. More than I could say for some of the newer vehicles I had been driving at the time.

Once it came time to get Colorado plates, the real fun began. It didn't pass emissions, not even close. I took it to a local Toyota shop and the quote was 4k to get me where I would pass.

4k to get an old engine to pass made no sense to me, so I figured I'd swap in a vortec. I had just seen Marco's fj60 on the ghost town run and he walked me through the process a little. Seemed like a no brainer, so I went for it. 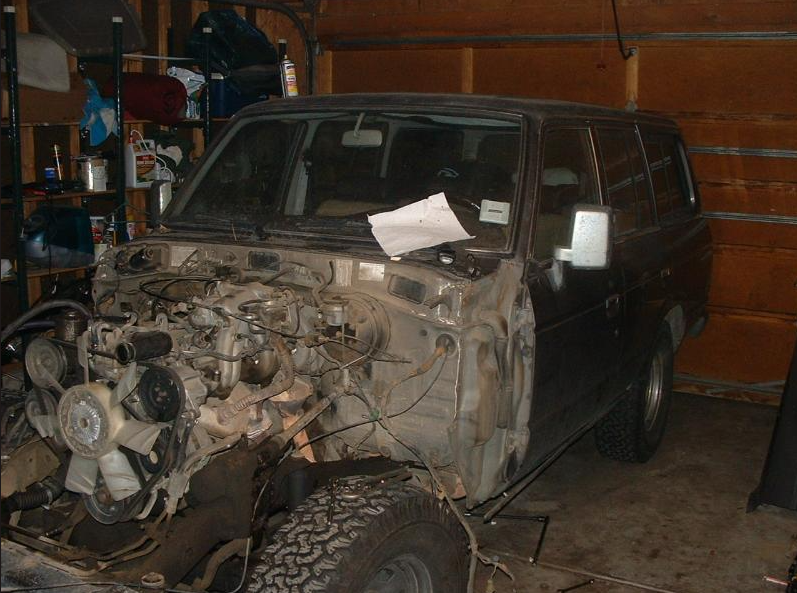 This has been my DD since I purchased it in 07, and unfortunately I didn't have a second vehicle for the majority of that time. That meant any upgrades I wanted to make needed to be done as quickly as I could. That will be my defense for why a lot of the work looks "good enough" anyway.

The 62 was stolen in 2017, and after a few months I decided I needed to move on and get a new DD, which is how I ended up with an LX450. Six months later the 62 was recovered, and I had done so much work to the LX I knew I would never recover the money/time invested, so I decided to keep both.

Now that I finally have a decent garage and a backup truck, I'm tearing the 62 back down in some areas to do them how I would have if I had the time initially.

Topics I'll try to cover as I get to them, less blab and more pics.

Current setup for those that want to fast forward to the end. Not a great pic, but the only one I have with 35's (33's at the moment) and I'm sure there will be some wondering if 35's would fit on the new coil spring setup. I haven't tested the flex of 35's but they look like they should fit and I was told I should be fine up to a true 35 with a 2.5" coil lift, similar to an 80 basically. 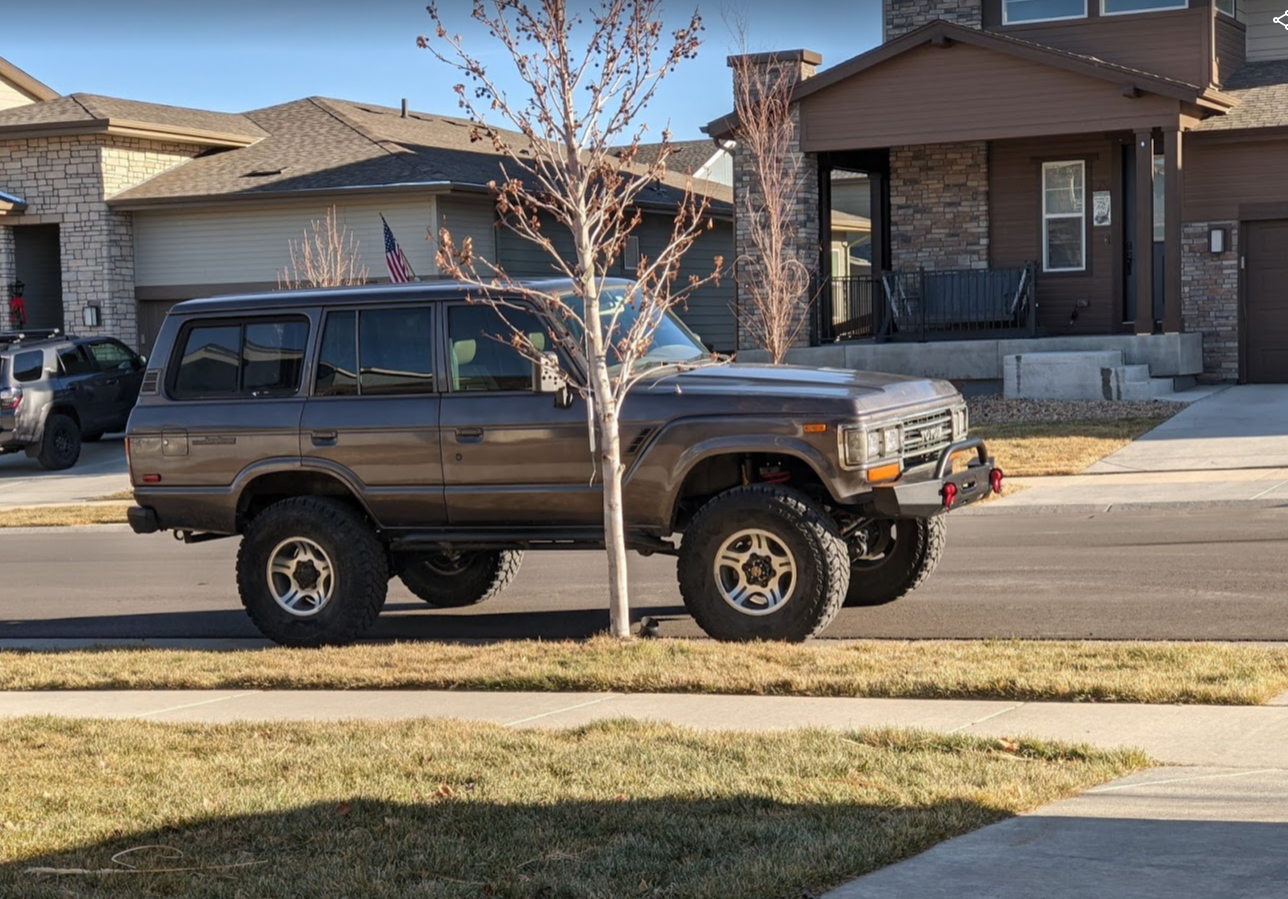 Always great to see threads about FJ62s. Some say the last real Land Cruiser was the FZJ80 but, being biased as I am, the FJ62 can lay claim to that title too, imo. Yeah, it was the first Cruiser to have an automatic transmission but it was also the last to have a leaf spring suspension. A truck, in other words. It will be fun to watch how you proceed with the project, Satchel, as it will be a reminder of the similar processes I went through over 15 years ago. Good luck and have fun with it as it will be rewarding!
K0OMC

What I mess I have in here. 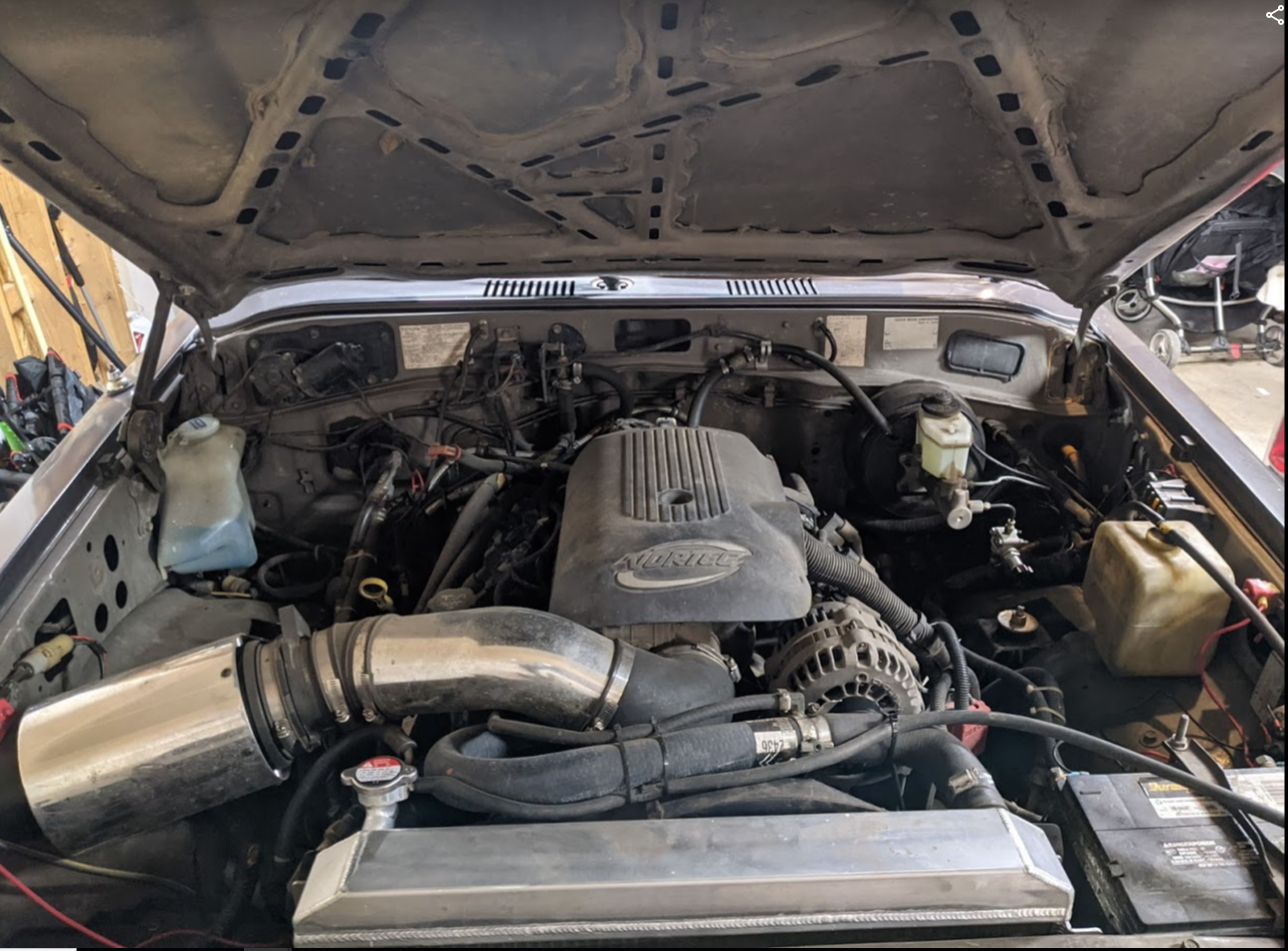 As mentioned before, I was in a bit of a rush to get the engine in a decade+ ago, so I'll let this pic serve as the before pic. I'm not tearing the engine down, but I am changing mounts and cleaning up wiring and all that mess.

A little info on the swap from long ago.

-Engine: 2002 Yukon XL 5.3 Flex motor. I kinda lucked out without knowing what I was doing. 1) This engine happens to have a return less fuel line. It has a regulator on the supply line, so no need to add one, and only needs the one supply line. Most need a supply, a fuel press regulator, and then a return feed. 2) The flex fuel model requires less fuel pressure. If I recall, it is something like 45psi vs 55psi on a normal 5.3. That means you can just hook it up to your normal fj62 fuel pump. Well, works in my case anyway and I have verified it is not getting starved.

-Throttle by wire: I kept the tac unit and installed the accelerator pedal out of a 2002 yukon I believe. I'll look that up. But I did have to reweld the pedal slightly.

-Headers: Used these from Advance Adapters, they have been fine. https://www.advanceadapters.com/pro...-generation-3-ls-series-v8conversion-headers/

-Transmission: Used an old 4x2 4L60E tranny (you need to have the 2wd version) that had a lot of miles, and it went out about 4 years ago. Super quick to take out and had it rebuilt new as a 4L65.

-Programming/ECU wiring: I used Wait4meperformance.com for reprogramming the ecu. Basically I sent them my ECU and the main wiring loom coming off of it, and they sent me back a reprogrammed ecu and wired up the main loom for like $400 or so. I don't have any experience in other trucks like this, but most people that deal with swaps like this are surprised when they punch it in my truck. I would assume I'm running around 320hp or so. Those guys did a great job.
Last edited: Jan 22, 2021
88 FJ62 "Goat Resurrected!"
69 FJ40
96 LX450
2000 LC

Dropped the seats off with @rckhound on my way to the Rust Dr in Grand Junction.

Can't wait to see how they turn out!

Thanks again for taking this on! 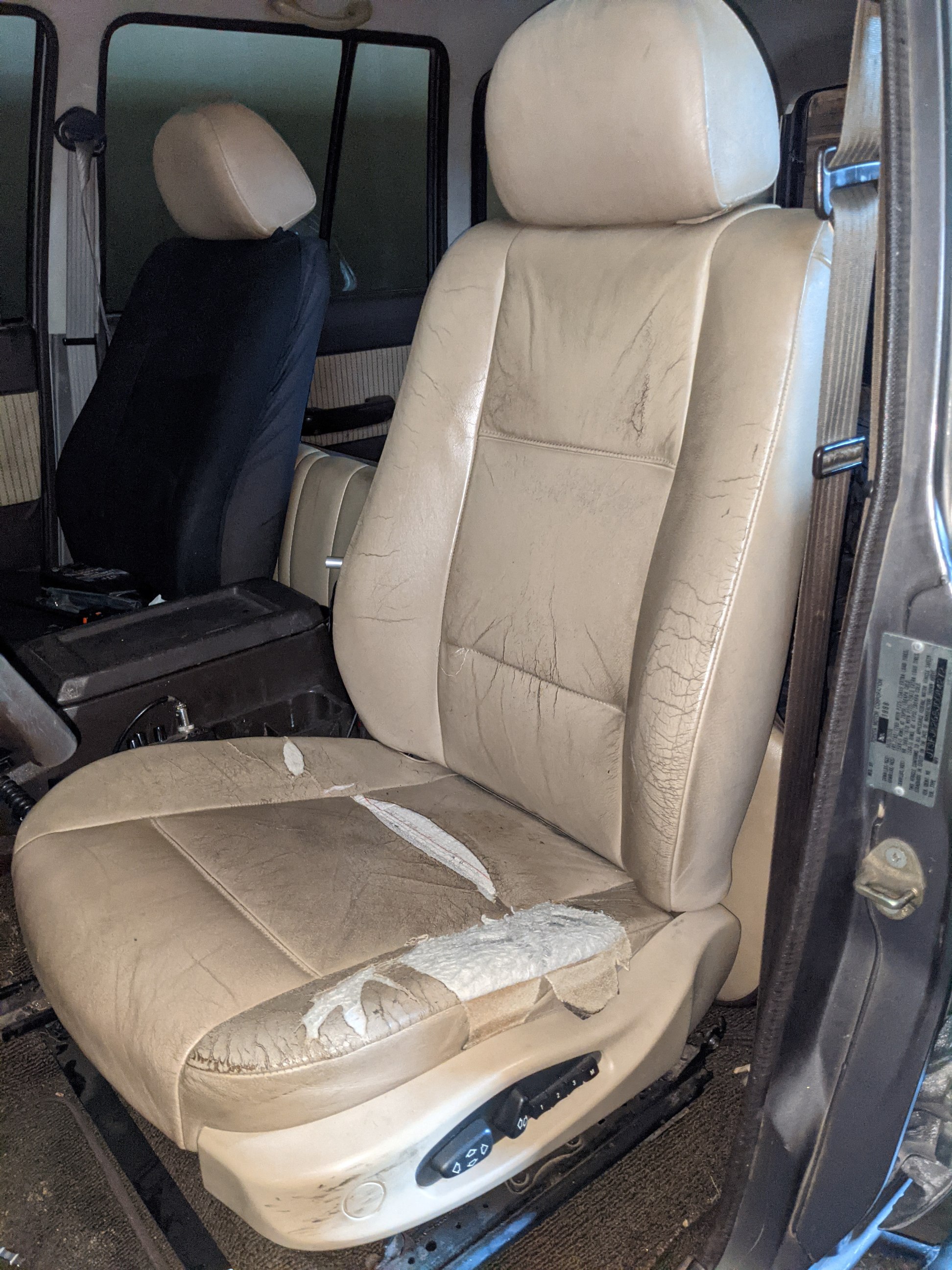 Took the truck up to Jason, the Rust Dr, in Grand Junction to get some rust mitigation and frame protection going on. Some of the new suspension items started self disassembly, but I'll get to that later.

Some shots of the work so far. 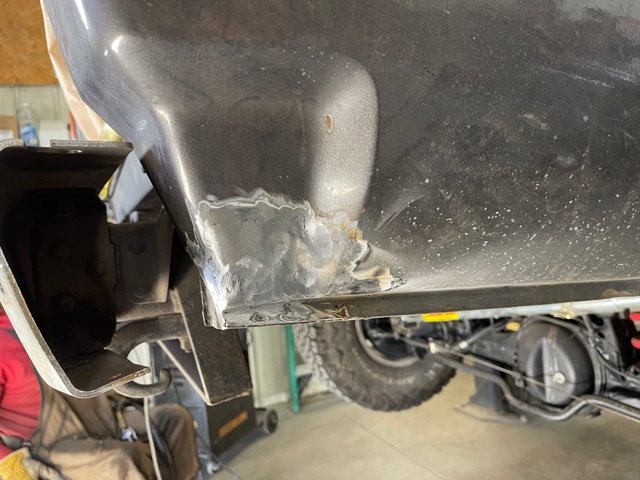 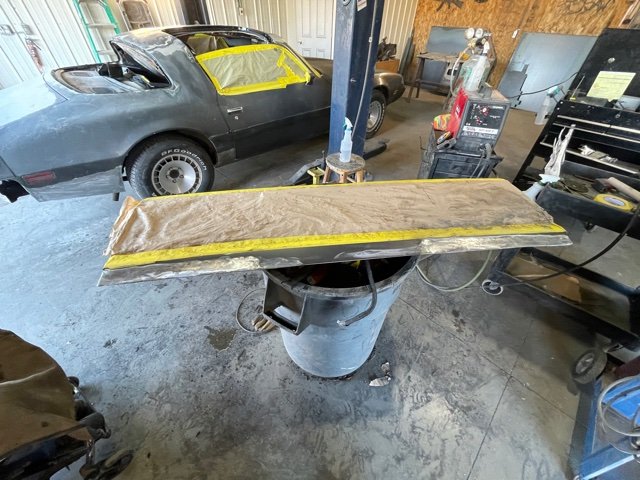 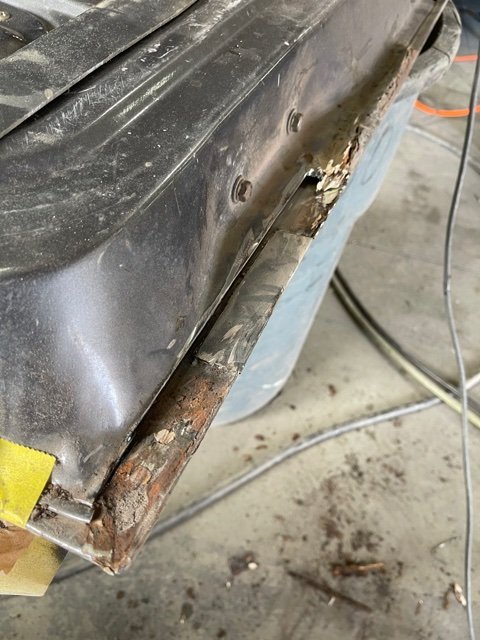 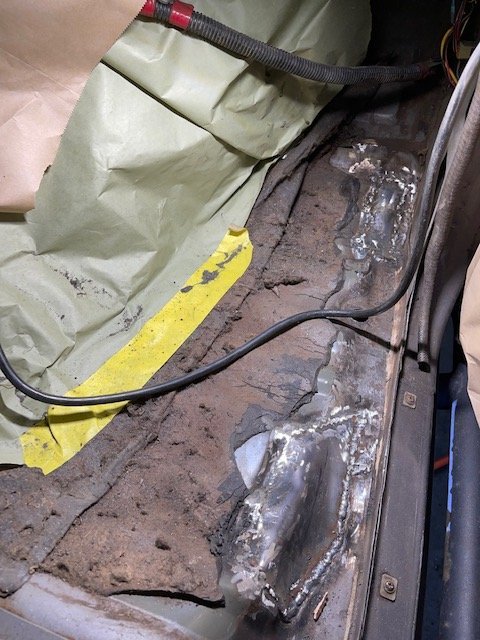 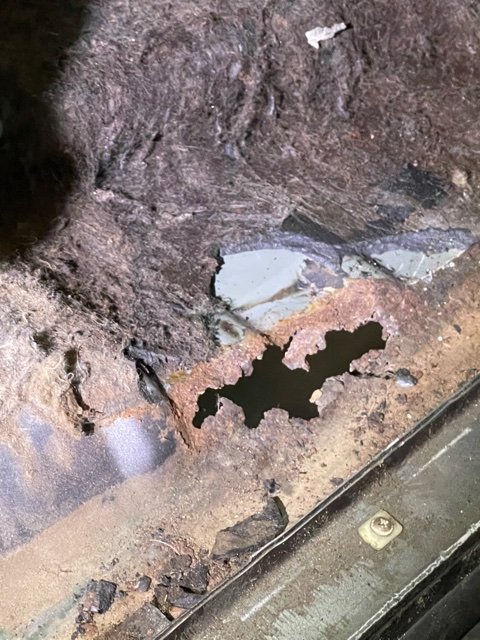 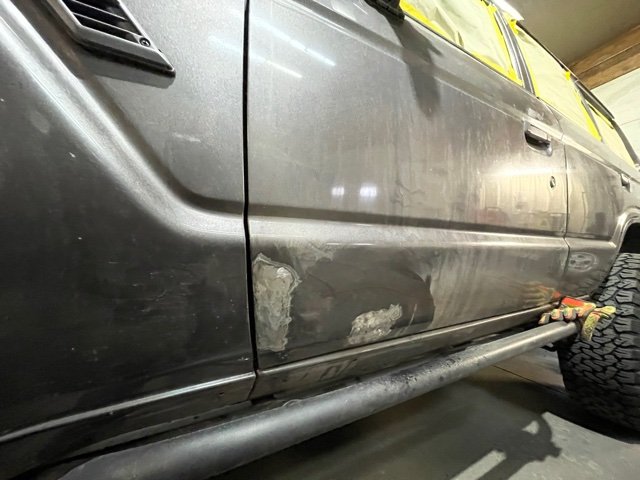 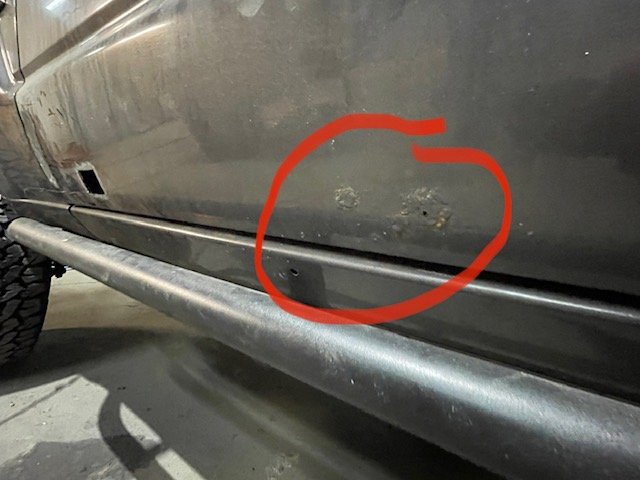 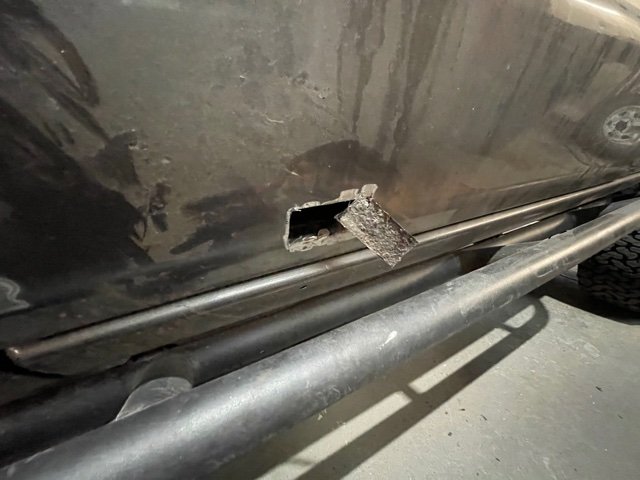 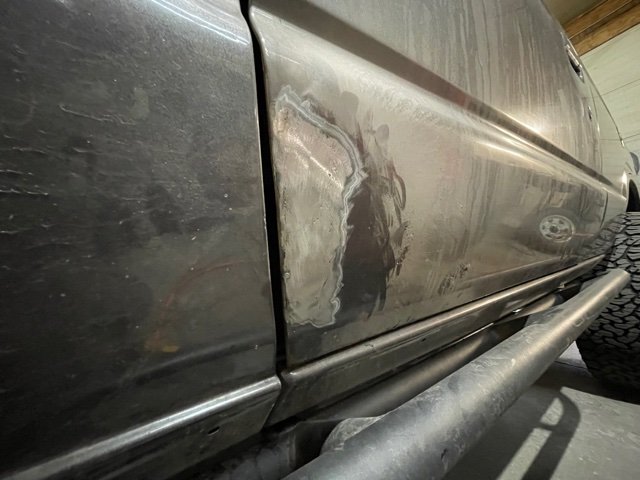 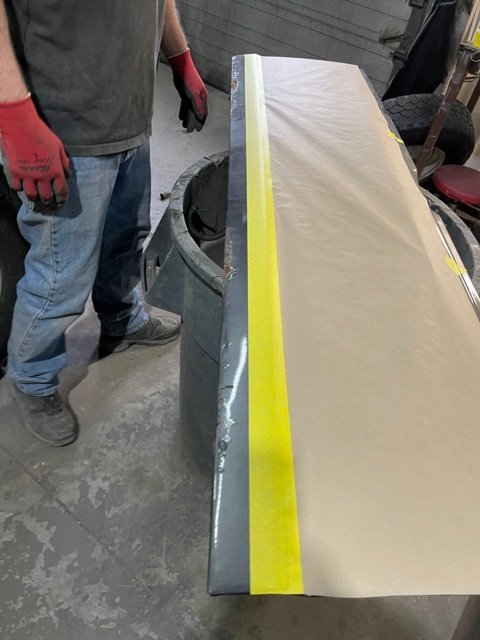 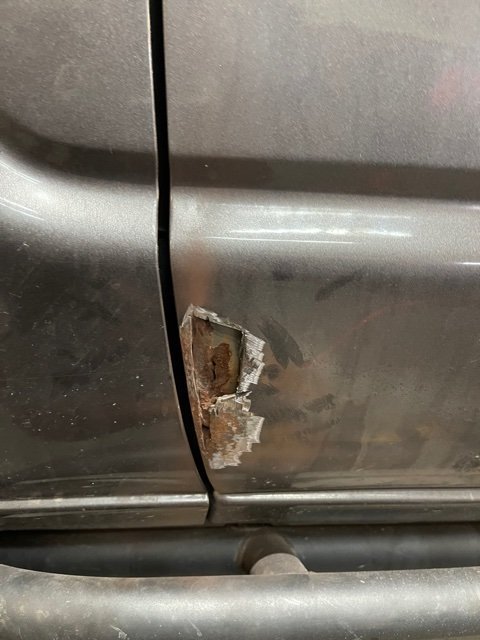 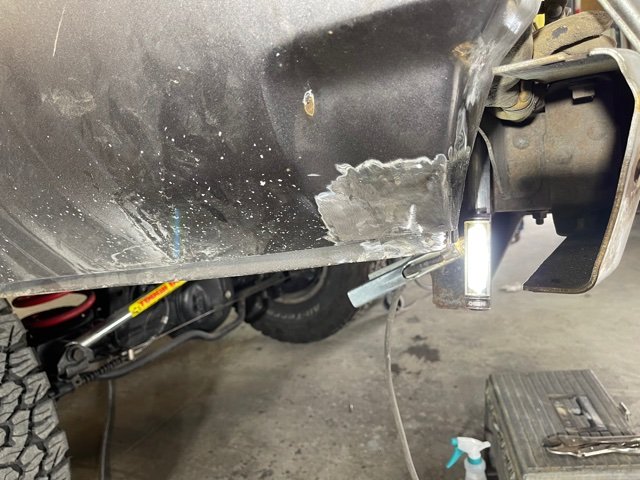 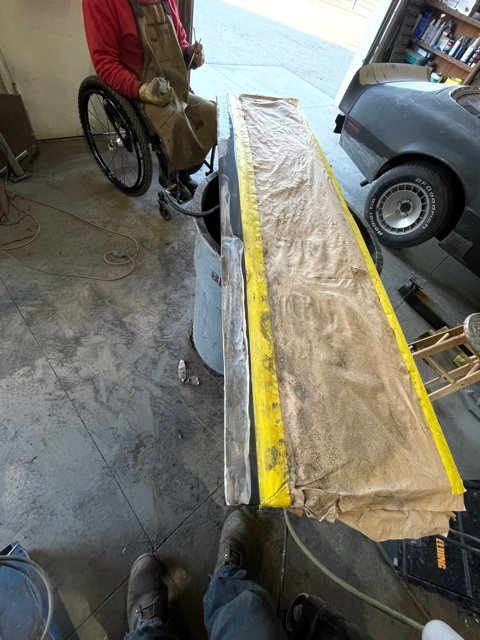 Repaint of the problematic rusty areas finished. This was done by Thompson Rod and Custom in GJ for a very reasonable rate. 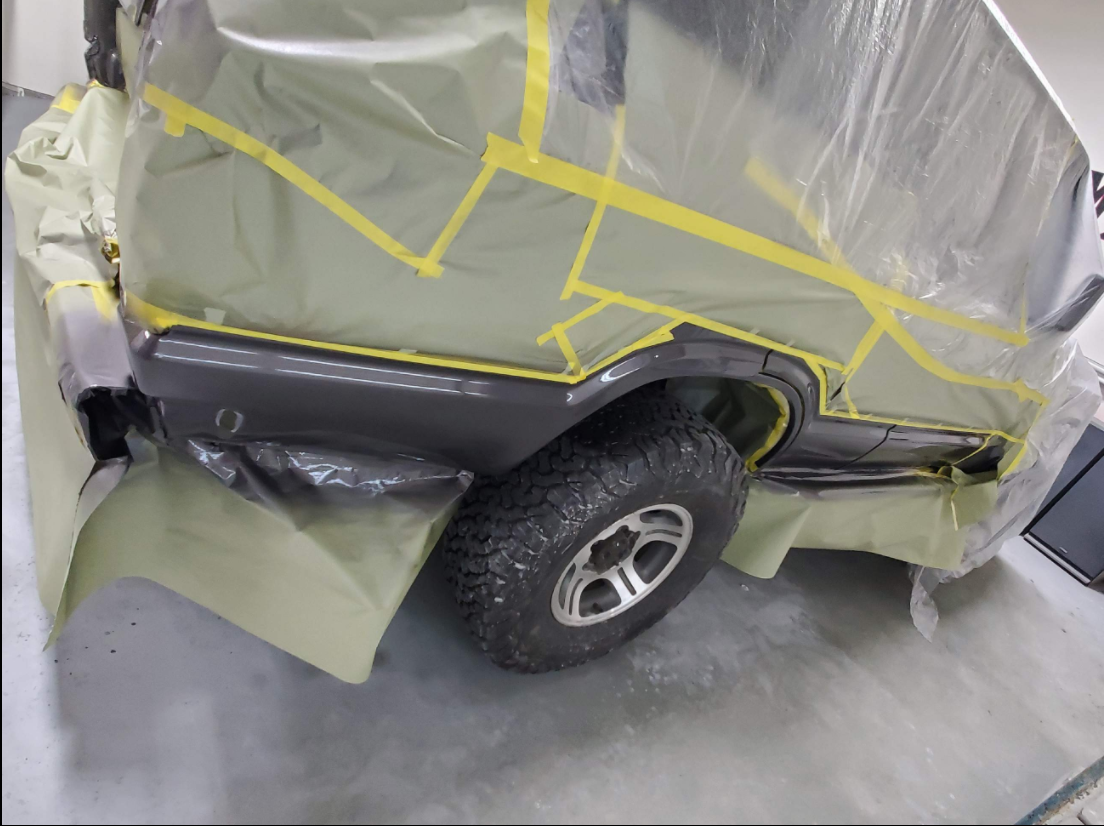 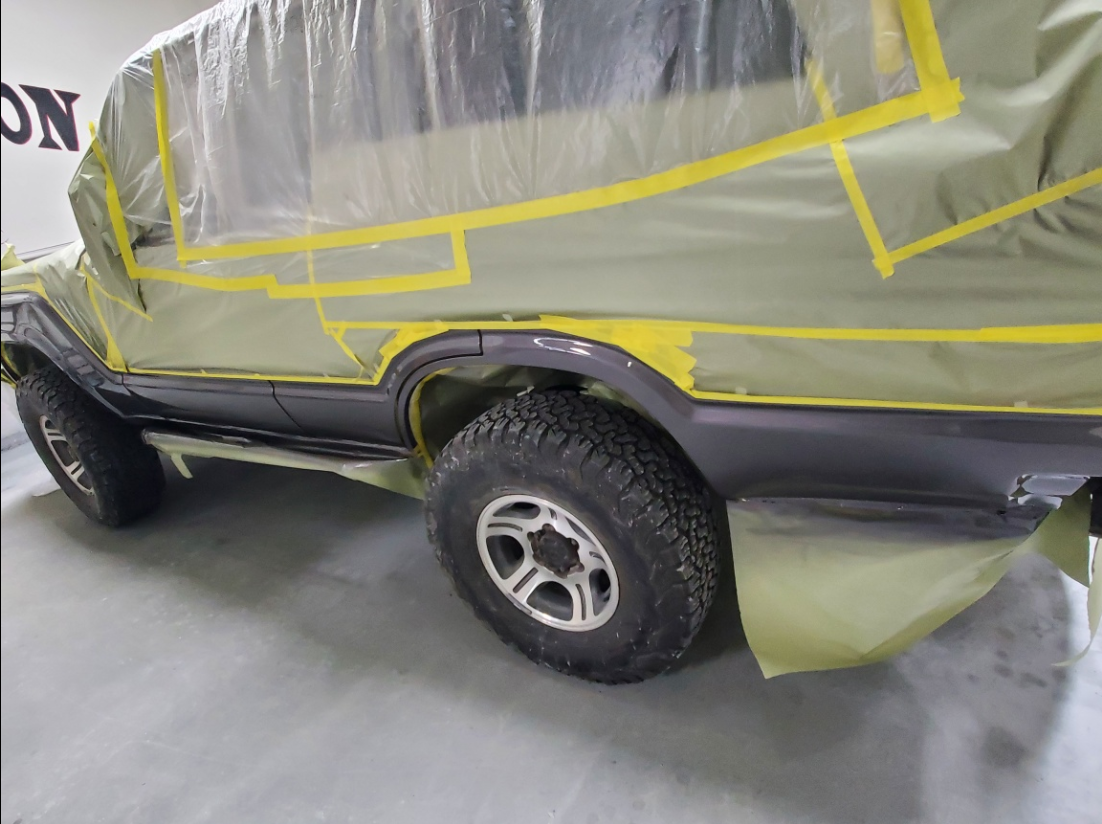 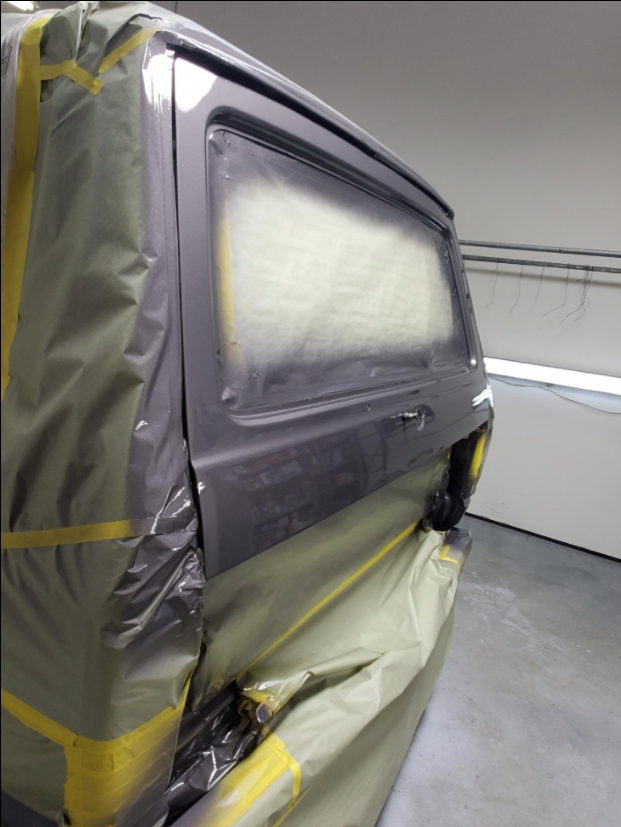 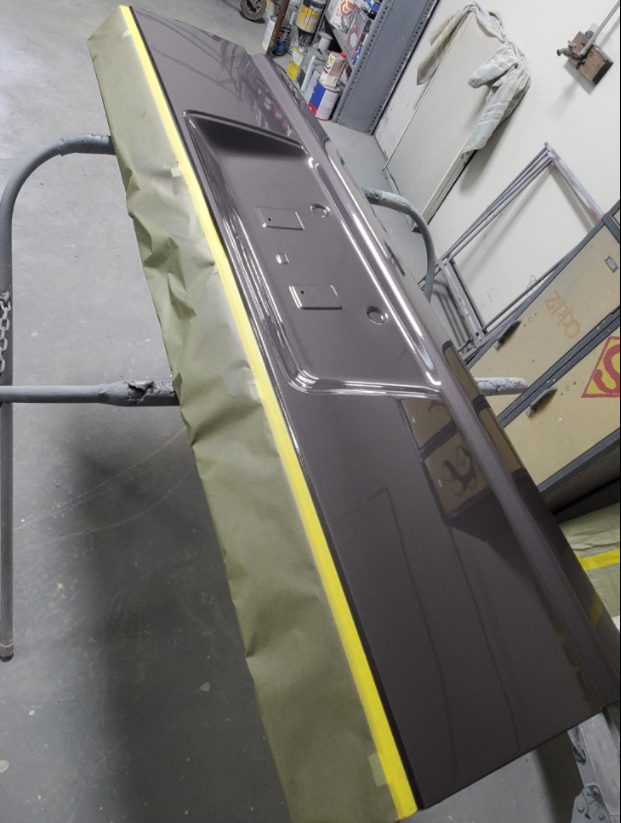 That looks fantastic! I'm guessing based on your location we're really close to each other. Perhaps a meet-up and a beer is in order when you get it back from paint!
Brett

shellb said:
That looks fantastic! I'm guessing based on your location we're really close to each other. Perhaps a meet-up and a beer is in order when you get it back from paint!
Click to expand...

Now that the paint work is done, please tell me you will rustproof from behind with a grease-type rustproofing (plain old axle grease) smeared heavily on the backside of all repaired areas? With good metal, paint on the front, and grease on the back, you will be good to go for many years.
Steve H. - KE0KNH
Colo Springs, CO
'78 FJ40, '89 FJ62, '98 4Runner, '06 GX 470

Reassembly. So far I'm really happy with how well the lower paint job matches with the truck. Way better than I anticipated for the price I was charged. Hoping to have it back this weekend to start reworking the coil suspension. 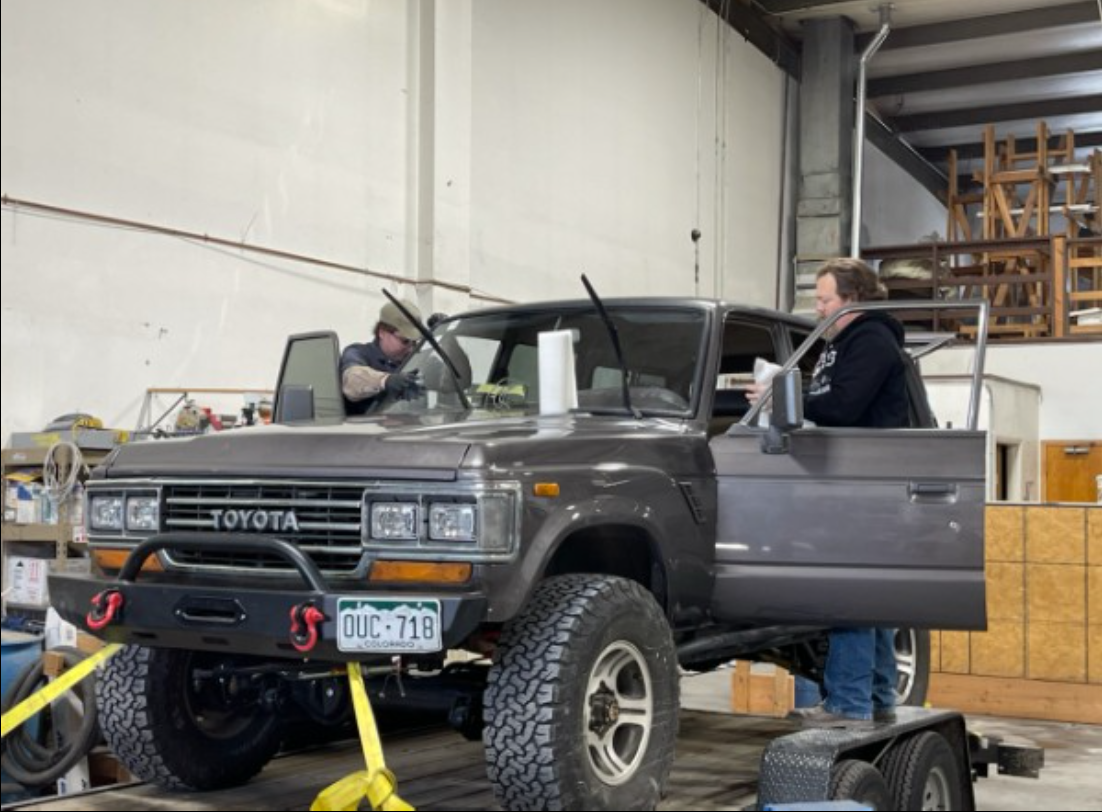