This thread will cover technical information primarily about installing from scratch GMRS or switching from CB.
Last edited: May 3, 2021

Question that comes up often and has already is antennas.

First take-away here is your current CB antenna is itself of little value for GMRS. The two services use vastly different ranges of frequencies and have different criteria for antennas. There are no ways to practically adapt or modify a CB antenna itself to electrically work so plan on buying or building a new one.

Second is the mount might or might not be useful. Where a 3/8" bolt worked fine at CB frequencies at GMRS frequencies the bolt itself becomes an antenna. For CB you probably have something similar to this, for example. 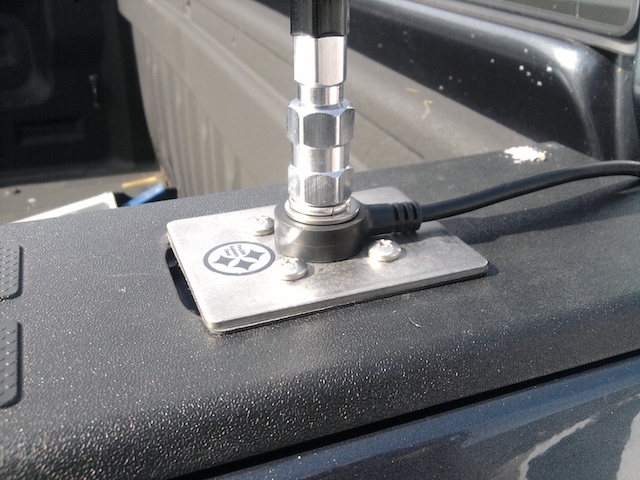 GMRS is much higher frequency and more sensitive to abnormalities. As a result GMRS antennas often use what's known as NMO (New MOtorola) bases like this.

This was actually developed in the 1970s specifically to address issues with VHF and UHF antennas on cop cars and firetrucks. Normally these require a 3/4" hole and are best suited for mounting on sheet metal. But there's been developed all sorts of NMO mounts for lips and stuff. Leverage what hams have come up with. 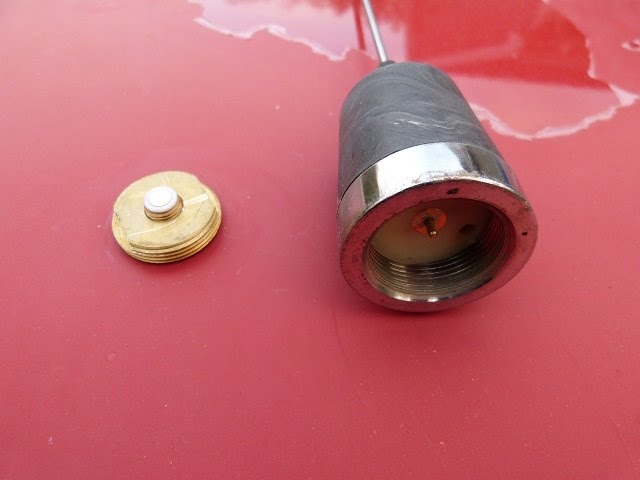 More recently a version of a SO239 (similar to the connector you'll find terminating your coax on the back of a radio) appeared as antenna bases. This works OK but you usually only see this used on ham antennas since it's not great mechanically or environmentally and would probably not last long abused on municipal vehicles. These actually mount in a 5/8" hole. 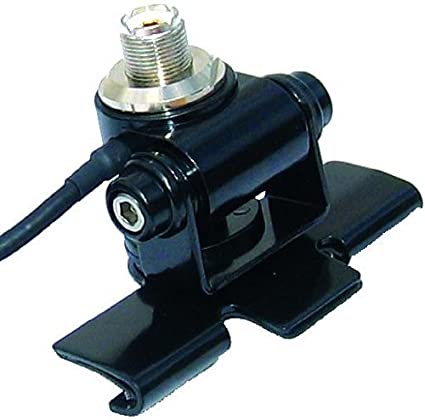 Practically speaking I'm not aware any 3/8" stud antennas for UHF. There may be some but it's certainly not common. You can adapt a 3/8 stud, though. I've seen them to SO239 for sure. 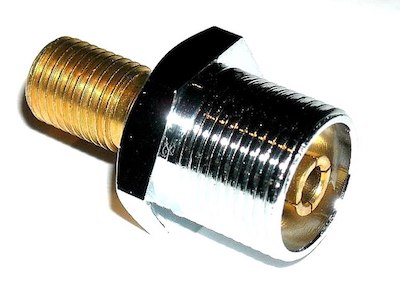 This can work but it's a kludge that's going to create electrical and water leakage issues eventually. If you have a mount you really want to reuse it's better to find a mount that is more direct from the coax to the antenna base. They make NMO bases that fit 3/8" holes, for example. Assuming the mount itself has enough room for the larger diameter NMO these will work just fine. 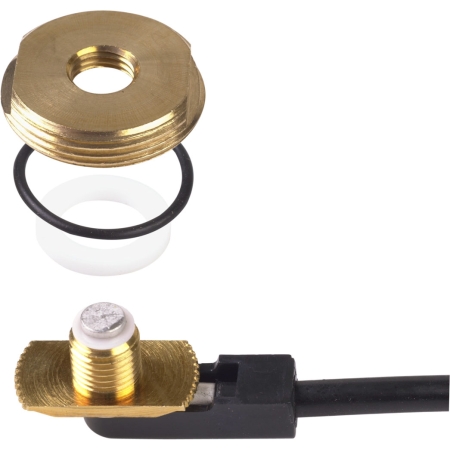 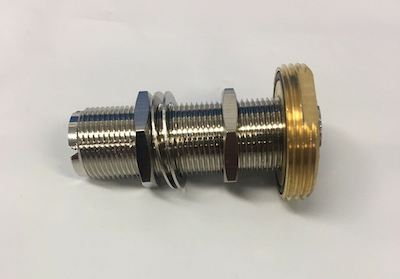 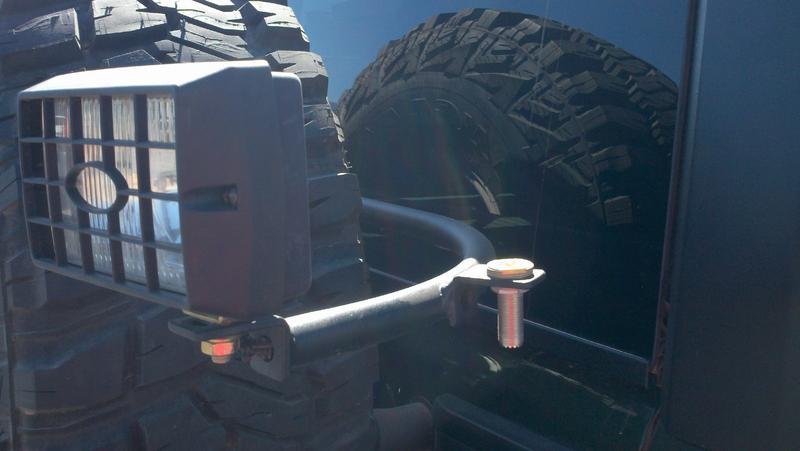 Good info Dave. I'm going to do this on all my trucks, and would like to use my existing coax and mounting tabs. Would something like this work to allow that? Does GMRS have antenna coax length restrictions or recommendations? it seems like the 3/8" NMO bases tend to come with 17' of coax, and I'm hoping to not to have to run cable again. On my tow rig, I have nowhere to put 17' of coax for what is about a 5' run.

Thanks for starting this thread. Very timely!!

I forgot to mention that if you do use a bulkhead like that with a PL259 at the end of the cable instead of directly terminating into an antenna base you should wrap it with something to keep it watertight. They make this stuff called, clever enough, Coax Wrap that's a kind of gummy silicone tape that works well.

There's nothing magical about 17' of coax. I don't know why they settled on that length to include with NMO bases. It's 5.2 meters so probably that it's not a multiple of anything so there's no chance of it becoming an antenna itself.

But generally speaking you just cut coax to whatever length is long enough to comfortably reach the radio. If SWR is significantly changed by trimming coax that's an indication your antenna has issues.

If the coax run works and you can adapt or rework it for the correct connectors and antenna base there's no reason to replace it. RG-58 is RG-58.
Last edited: May 4, 2021

I replaced the CB in my vehicle with one. I did leave the CB antenna and cable for now and will likely take it out in the fall if not sooner

I do like the small antenna on the ARB. I understand the better antennas probably will provide improved coverage, but that is what the HAM is for 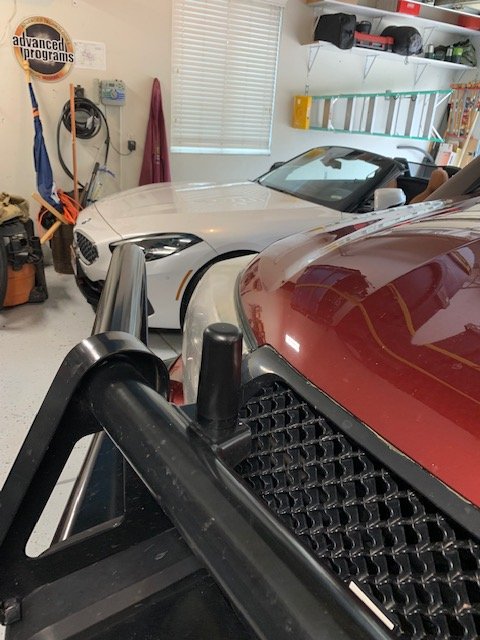 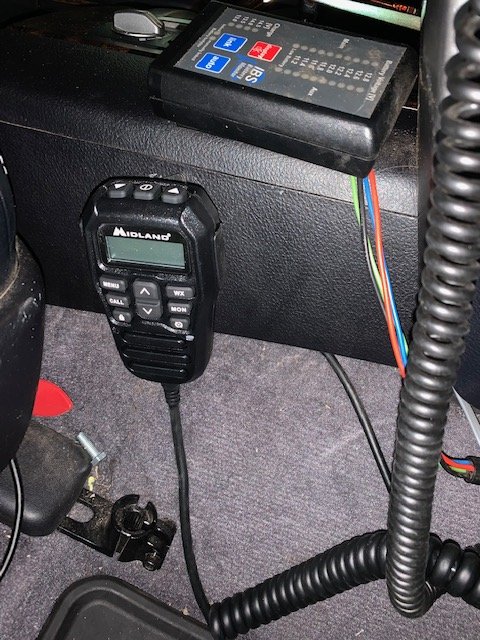 As more people adopt GMRS I believe the issue of squelch tones will start to creep in. Around here there's a higher than average number of amateur radio people so the concept of tones won't be completely new, at least to those who've done some repeater stuff.

What in the heck am I talking about, anyway?

The concept covers lots of terms. Subtone, PL Tones, privacy tones, CTCSS/DCS and others. Don't get too wrapped up in the actual term a manufacturer uses just understand what they are.

Suffice to say CTCSS (Continous Tone Coded Squelch System) is when a radio puts a low frequency tone on your signal when you transmit. When set to listen for it a receiving radios will only allow audio to come through from signals that have the correct matching tone. If a transmitted signal does not have the matching tone the receiving radio will ignore it.

If the receiving radio is set not to use tone at all then it will allow audio from any signal it hears whether it has a tone or not.

In both cases the receiving radio is designed to filter (cut off) very low frequencies (the highest tone is 254.1 Hz) so you won't actually hear the tone on your speaker. The radio knows frequencies even though you don't hear it, though. The radio basically removes the bass sounds from about 300 Hz and lower from your speaker.

DCS stands for Digital Code Signal. So instead of a tone it's a very slow digital sequence that's put on the signal and listened for by the receiver. The concept is the same just a different way to achieve it.

Repeaters (a different discussion, just know they exist) use tones extensively because it's a way to make sure the signal they're hearing is from a radio intending to use the repeater. It's sort of a key to unlock it. Most of the time the tone isn't a closely guarded secret but just a way to differentiate signals that are supposed to be heard from those that aren't.

The second reason tones exist is to increase the capacity of a frequency. If you have one radio frequency and no tones, like a CB channel, everyone on hears everyone else. It can get confusing if you have two or more discussions going at the same time. So if you put a subtone on different discussion signals then you only talk within tone circles (so to speak). It was a way in the 1970s for public service dispatchers to select groups. So fire normally didn't get dispatches for police and that sort of thing.

In the context of GMRS and FRS tones are used both ways. Neglecting for the moment repeaters in the case of talking directly to each other we need to all either use the same tone or no tone at all. As we build out the installed base of FRS and GMRS radios the possibility exists we could establish an assignment of tones for various uses. At Cruise Moab, for example, this could be valuable since the number of high power (50 watt) GMRS channels is actually quite limited (15 to 22) and tones might be a way to allocate them to runs efficiently.

But before that can occur we need to make sure the concept is understood well enough that just about everyone can turn them on and off at will as well as change them on a per channel basis.

Also some radios (notably very low cost FRS) might not be able to do tones at all. Other radios can do tones but they are not configurable beyond what the manufacturer put in originally. So the question of interoperability is raised. A radio that cannot use tones at all can hear everyone no matter what but might not be heard by users with tones turned on.
Last edited: Jul 1, 2021

Effective 2/16/99 the GMRS rules have been amended and you may operate on any of the primary or interstitial channels shown in section 95.1763. Exception: Licensees who operate North of Line A and East of Line C may not operate on channels 462.650 MHZ,467.650 MHZ, 462.700 MHZ and 467.700 MHZ unless your previous license authorized such operations.
Click to expand...

Line A and Line C represent a zone about 65 miles inside the U.S. border with Canada where coordination of frequencies applies. It's something that you might encounter if you drive up north or on to Alaska. There's a few large cities contained in the zone - Seattle, Kalispell, Minot, Cleveland, Buffalo, Juneau - and most of Maine and Michigan.

Frequency Coordination with Canada Below 470 MHz

View larger map. Every effort was made to accurately depict the rules. In certain instances an interpretation of the rules was made which may not necessarily reflect the legal position of the United States or Canada. This map is created in the NAD27 coordinate system, since the agreement between... 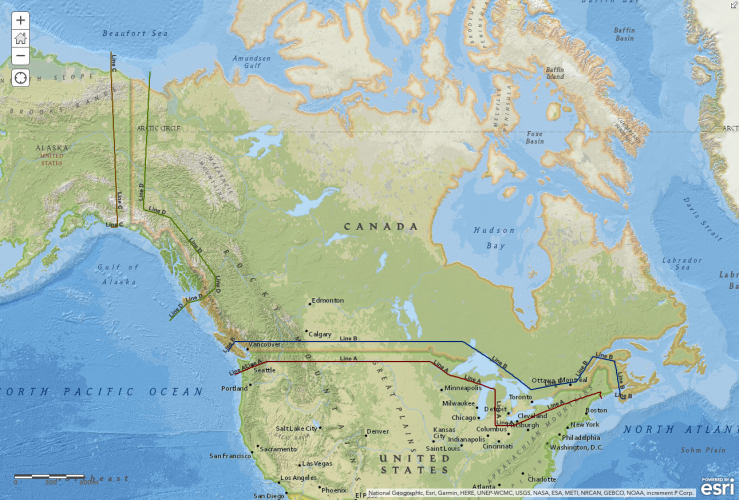