Got my 70 FJ40 finally started today and drove around the block without any problems. That was a huge milestone. I need to fine tune the rebuilt carb and here is my first question of many I’m sure. I pull the choke knob and the flapper does not close. I have to move the mechanism by hand for it to close. I lubed the moving parts without success. Seems like linkage is bidding some but I’m not convinced that is the issue. Any suggestions on what to check first?
Doug Hanney, Monument
70 FJ40 - Stock
82 Pickup - Stock
84 FJ60 - Stock
87 FJ60 - Far from Stock

That is interesting, can you take a picture or two of how the cable attaches to the carb/choke? The system is pretty straight forward. Perhaps take a video with your phone while operating the cable in the cab. This will let you see what is happening.
Ricardo Maestas - Bio Page
KD0CAW
1999 LX 470
SOLD - 1971 FJ-40
TLCA #18941

I'm checked over the choke cable and verified everything is hooked up properly. The choke plate does not move back and forth smoothly, like it's hanging up on something. I think there is some gunk in the plate pivot shafts causing friction so I sprayed carb cleaner in the two pivot locations and it seemed to help some. Last month I disassembled the entire carb and dipped the parts it in a gallon of carb cleaner except the carb plate mechanism because I could not remove the two small copper screws holding the plate on the shaft without destroying them. I think I'm going to need to source a couple new screws and disassemble the choke plate mechanism for cleaning. Anyone have a couple of these tiny copper screws laying around or a source to buy them?
Doug Hanney, Monument
70 FJ40 - Stock
82 Pickup - Stock
84 FJ60 - Stock
87 FJ60 - Far from Stock

If you can, try to avoid removing the screws. They are difficult to source and need to be peened when put back in. Is the linkage for the choke firm. I recall (but don't remember whose carb) the linkage had some slop and it would behave similar to what you describe, i.e. the choke plate would operate, but clunky and not fully. In that case, the carb was sent off to Jim C. who had the parts to rebuild/firm up the choke mechanism.
Ricardo Maestas - Bio Page
KD0CAW
1999 LX 470
SOLD - 1971 FJ-40
TLCA #18941

The linkage does have some slop but I don't know what is considered slop and normal on these carbs. I'll check with Jim C and see what it would take to rebuild/firm up the choke mechanism. Thanks for the suggestions.
Doug Hanney, Monument
70 FJ40 - Stock
82 Pickup - Stock
84 FJ60 - Stock
87 FJ60 - Far from Stock

As I recall, it did not take much slop for the movement to not be smooth. Ideally as soon as the cable moves, the choke plate moves. If the cable moves and the plate does not start immediately and the linkage moves towards the carb body or out (instead of parallel) from the carb body the slop is likely the cause of the clunky operation.

Update: I yanked out the choke cable and lubed it. Unrelated to the sticking choke plate but it's so much easier to operate now. After working the choke in and out about 20 times I noticed the choke plate snaps shut on its own about 20% of the time. I then noticed when the choke knob is out and I lightly tap the knob once with my finger, the choke plate snaps shut every time. I think the spring that snaps the plate closed is starting to wear out and the tap helps overcome the lack of initial spring tension. I'm guessing the more I use it the better it will work over time and at least I know the magic finger tap works for now.
One thing to note is the carb sat on a non-running engine for 25 years and was incredibly dirty and tarnished...pics of before and after for fun. 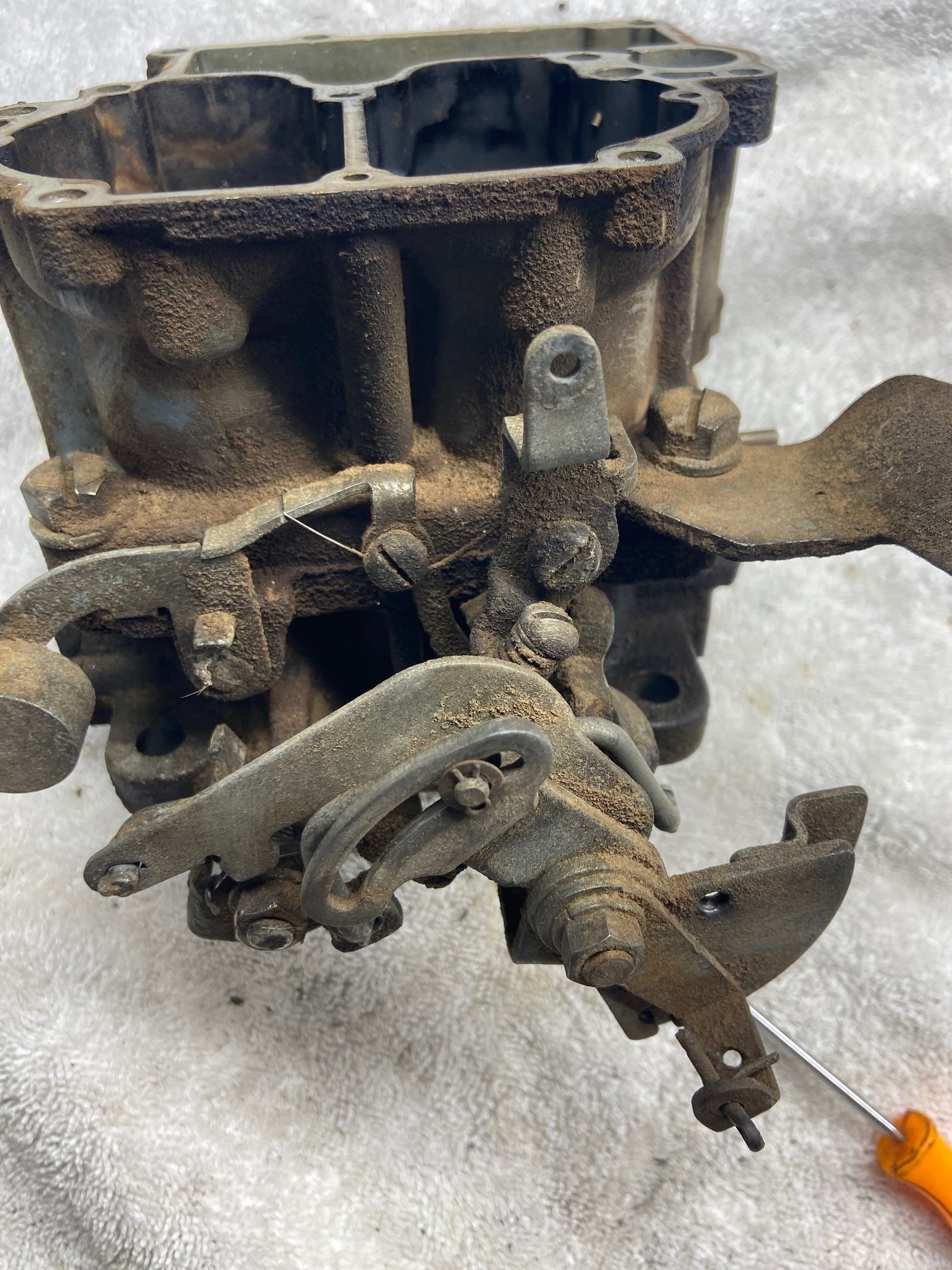 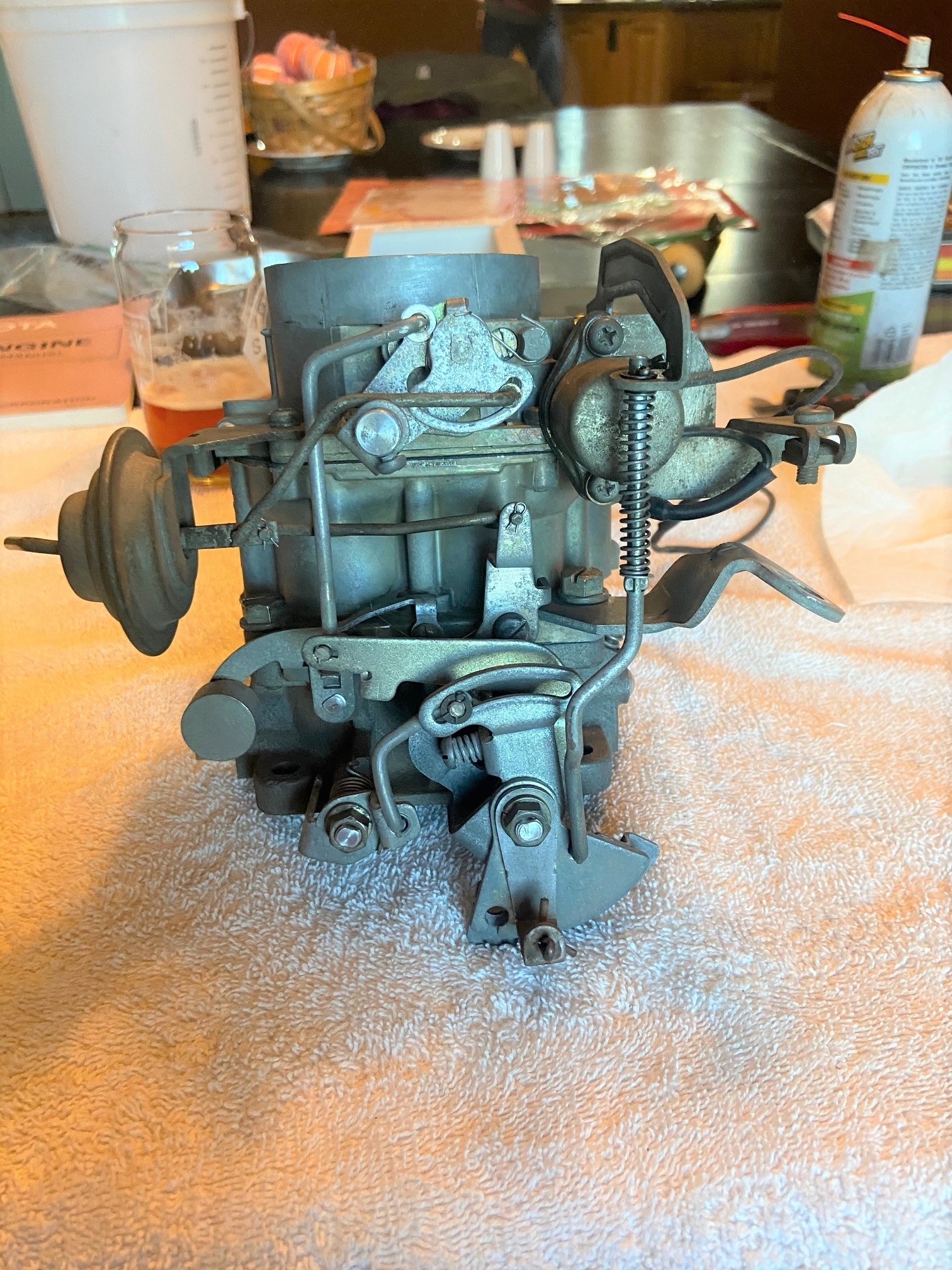