Anyone else seeing snakes? Never noticed them before around these parts... but I see these buggers pretty frequently now when out on a run, usually in the middle of the dirt path.

I was admiring how cute the guy was until he coiled up and snapped at me... now not so much. 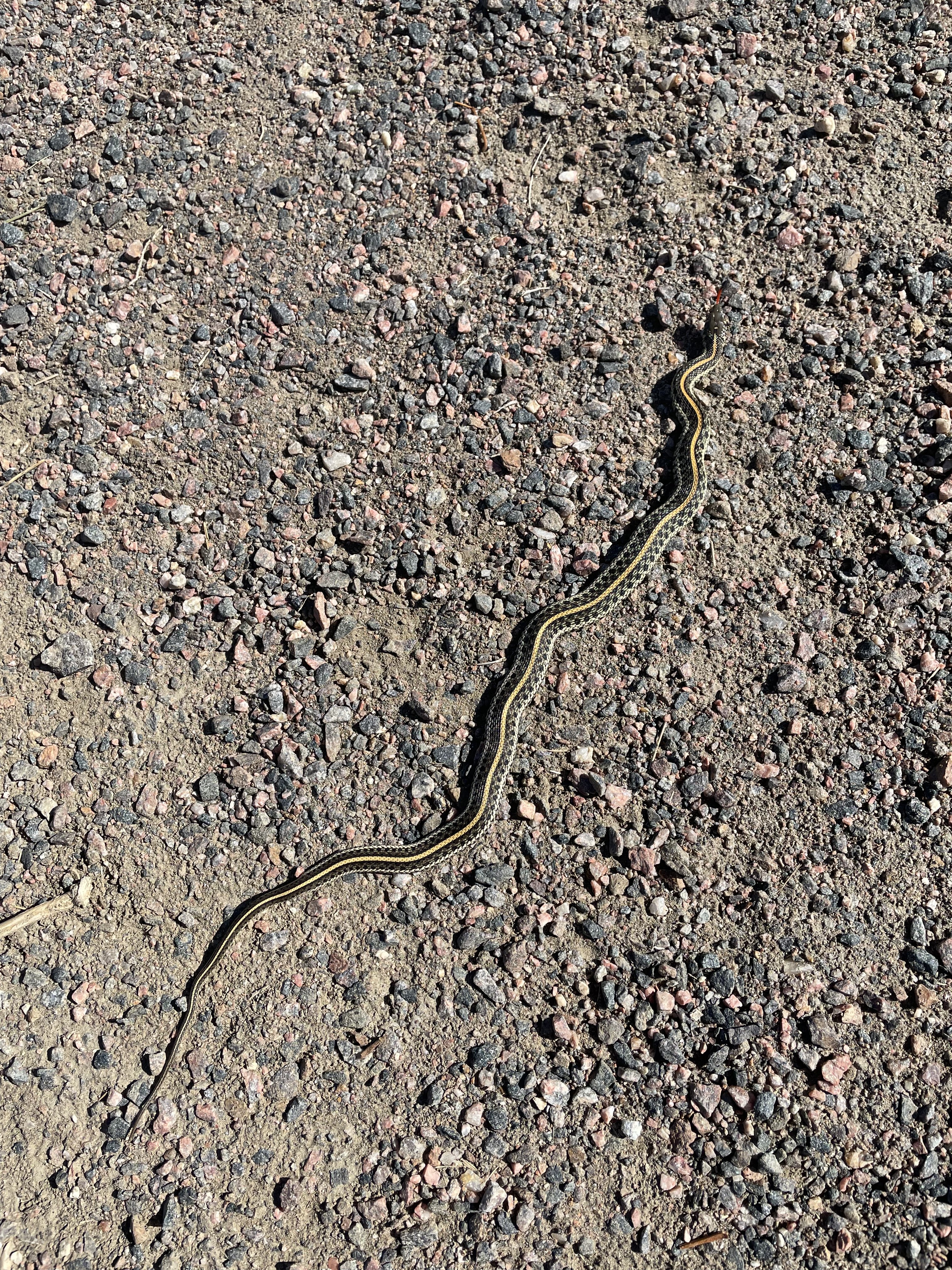 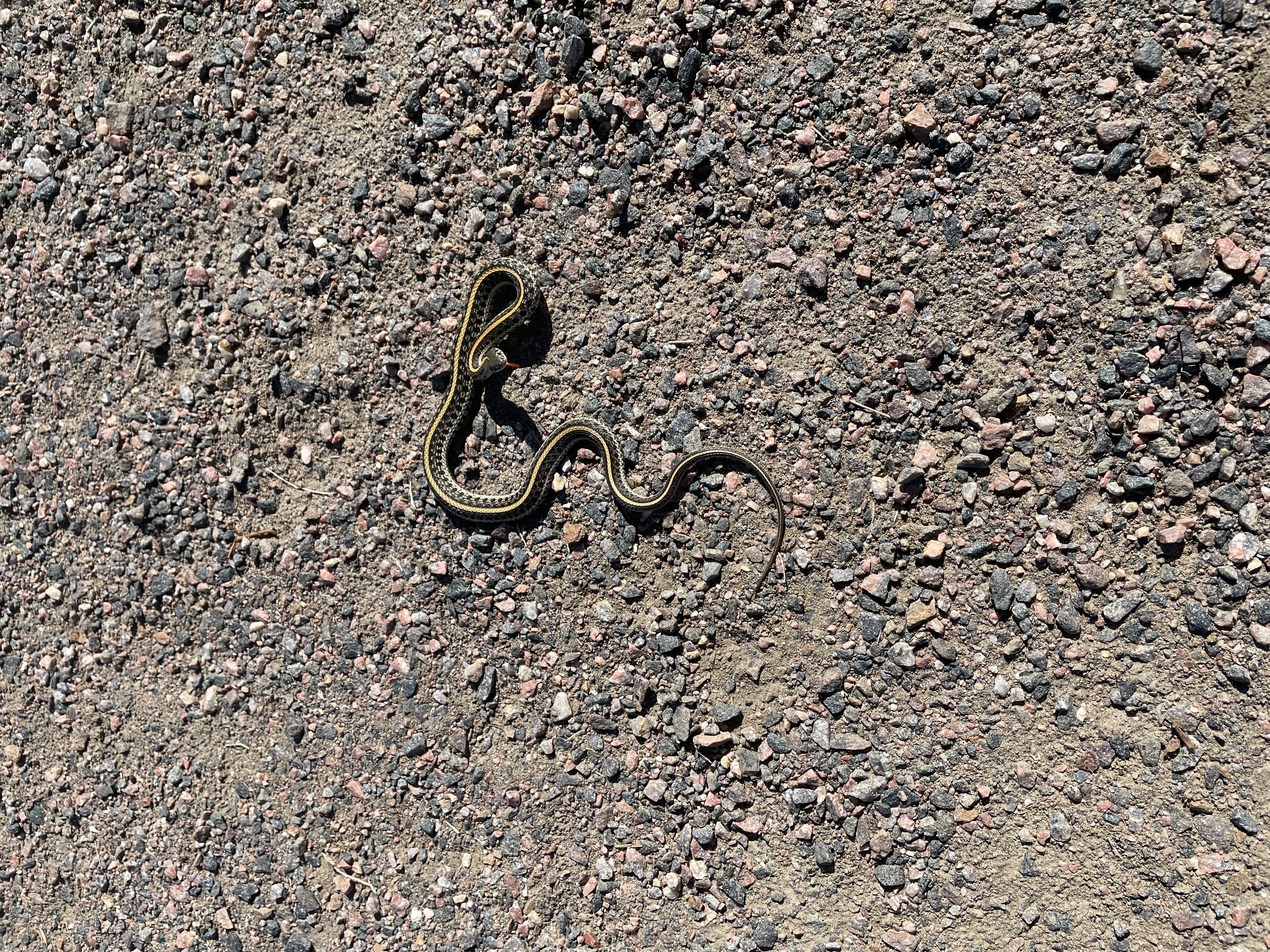 We have those all the time in our yard. they like to get in the pond and eat our fish...they're super good fishers...I catch them, and "OFF WITH THEIR HEAD!!" It insures they won't be coming back for more fish dinners....
Kurt Knudsen

Yep we have Bulls here. Love them taking care of the mice!
Brett

kurtnkegger said:
We have those all the time in our yard. they like to get in the pond and eat our fish...they're super good fishers...I catch them, and "OFF WITH THEIR HEAD!!" It insures they won't be coming back for more fish dinners....
Click to expand...

This guy was curled up in my fence about a month ago. 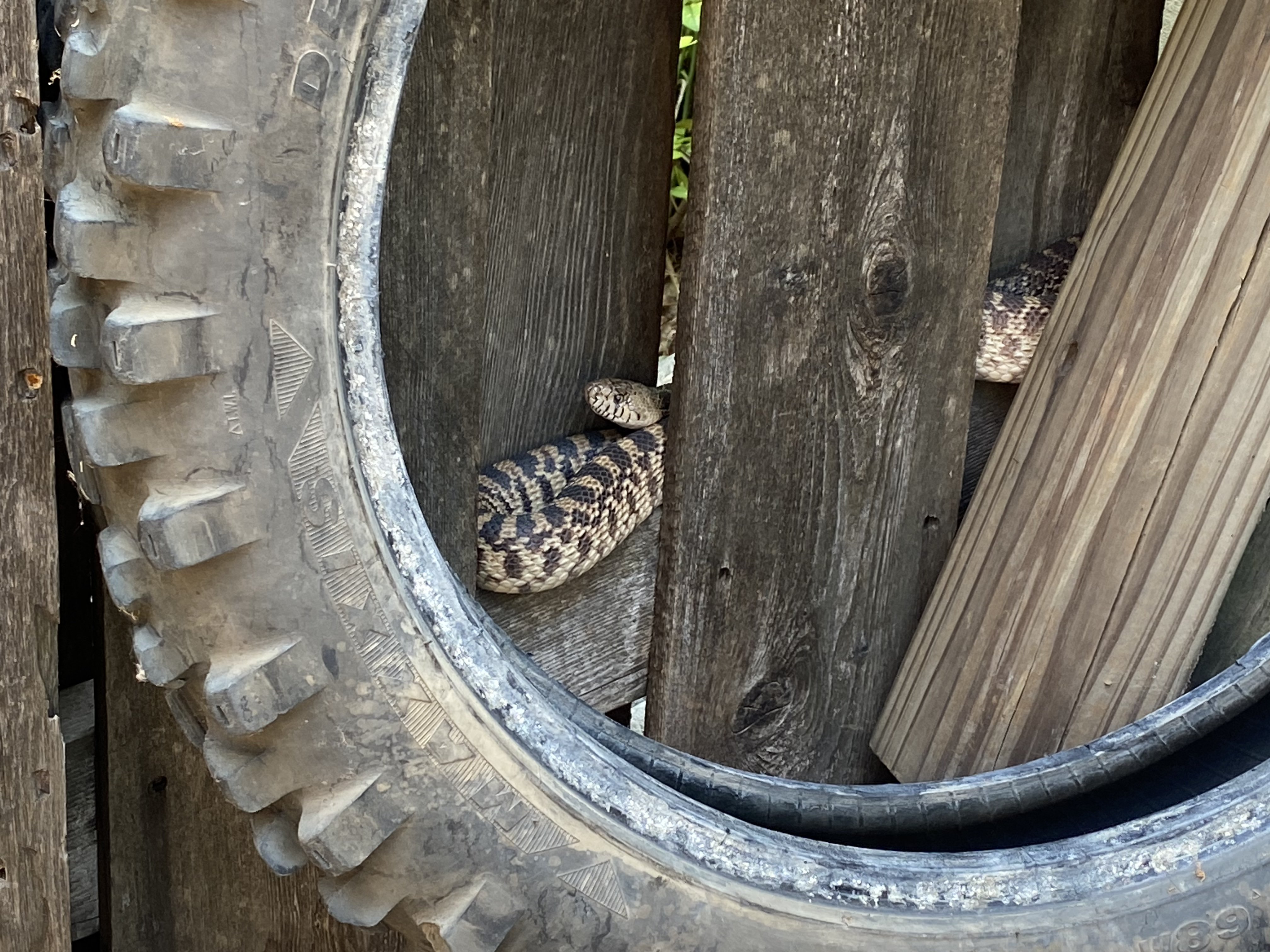 I freaking hate snakes. This guy terrorized my wife for a week this summer, but disappeared before I could dispatch him. In the pic, he'd climbed a 7' stone pillar, and was trying to climb the wood part to get to a birds nest. Fortunately, we have a hot water dispenser...

We see snakes out here almost daily. I worry about my dogs sniffing out a Copperhead or Cottonmouth when we run/walk in the forest, but so far they haven't. I don't like getting snapped at, but I think they're pretty cool critters. I almost ran this Black Rat snake over with the mower. It was doing it's best to look like a crooked stick. Lucky for her I saw her head first. They're impressive climbers too. It and this Rough Greensnake I found on a run were both pretty easy going and didn't mind being picked up. I wish I had a pic of the tiny little Ring Neck I saw the other day. The little ones are fast and hard to catch. My wife once told me she didn't like snakes. I made the mistake of showing her an adorable baby Hog Nose and she almost had a stroke. Doesn't like them? No, TERRIFIED of them. It's not funny, but I can't help but laugh when I think about that. 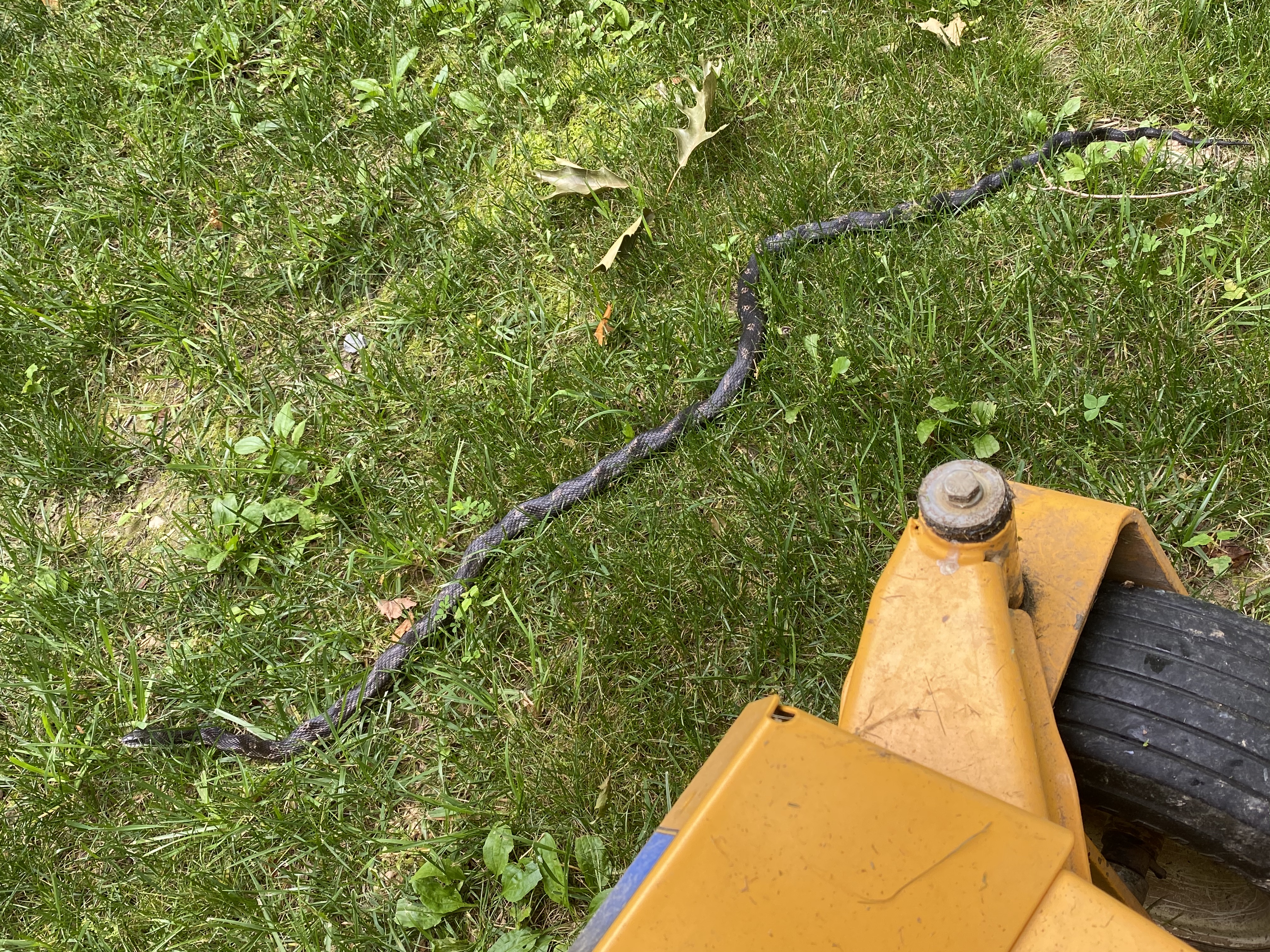 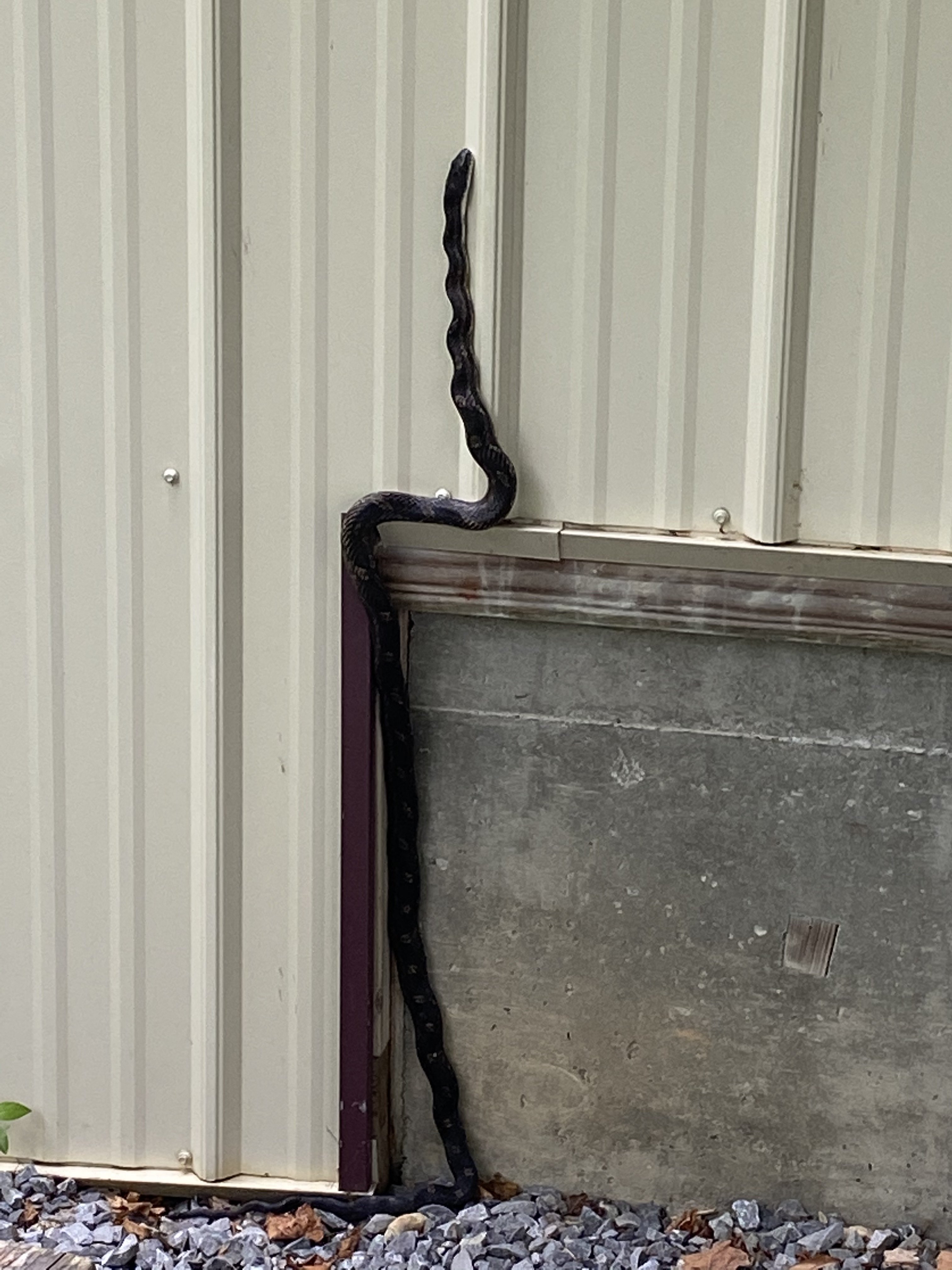 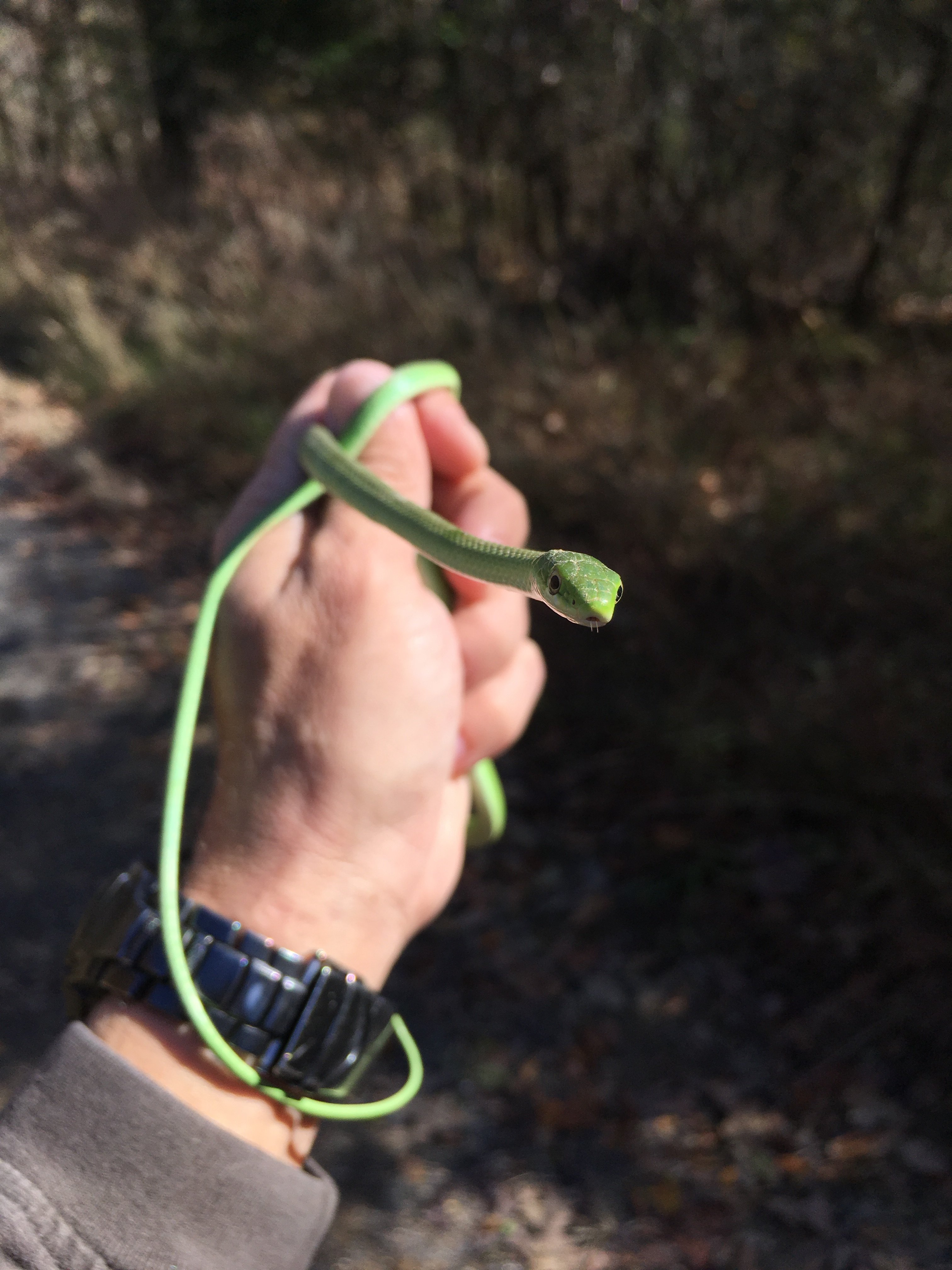 "Until you make the unconscious conscious, it will direct your life and you will call it fate."

I thought this Garter was dead with a toad's head and front legs it couldn't possibly swallow poking out of it's mouth. But, as soon as I got my phone out to take a pic it coughed it up and made a run for it. 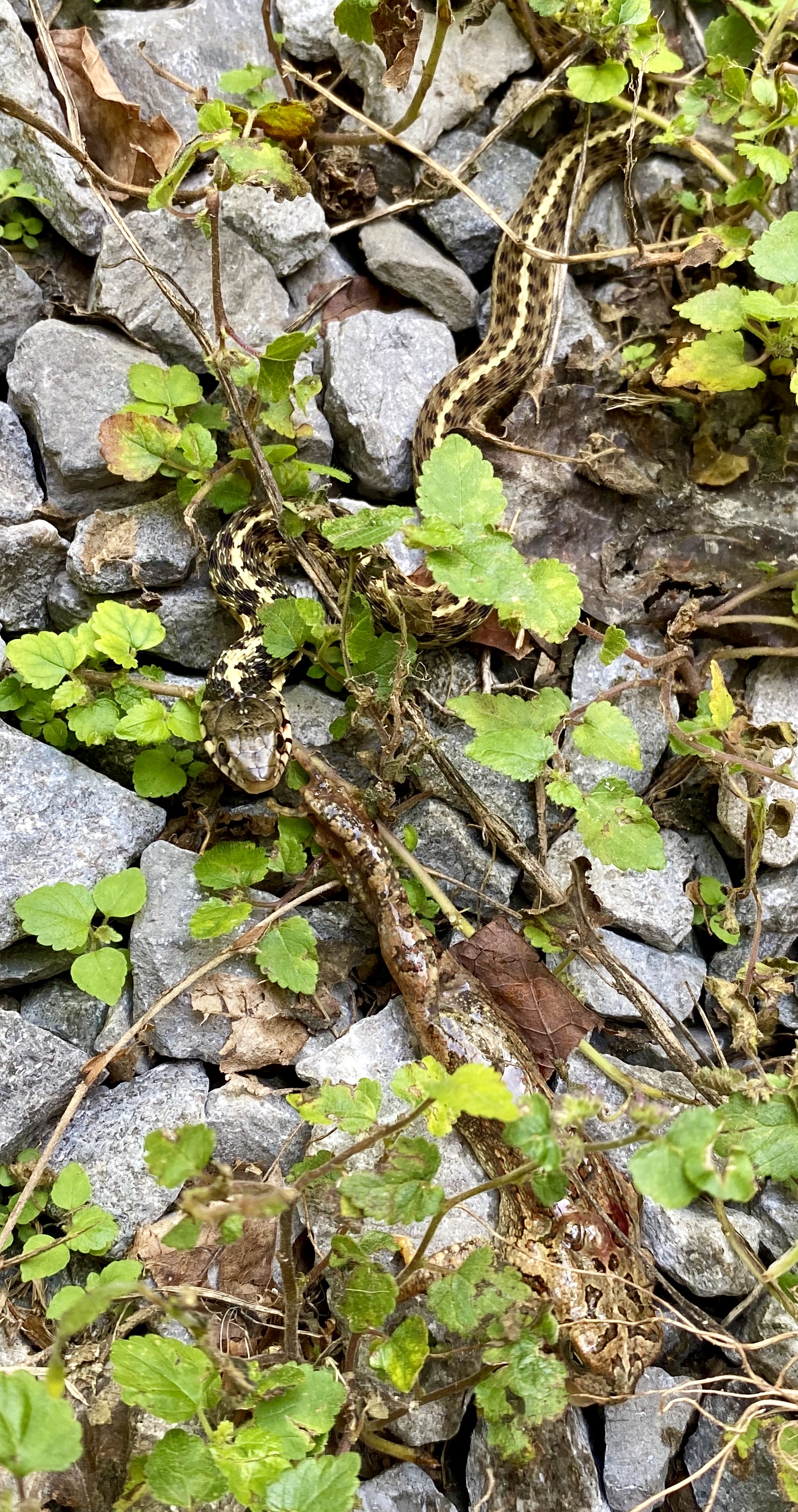 "Until you make the unconscious conscious, it will direct your life and you will call it fate."

damon said:
Looks to be a Plains Garter Snake. Harmless, but snakes still freak me out.
Click to expand...

We have a couple of nice sized garter snakes, they "wintered" inside of the valve boxes for our sprinklers one year which was a surprise when we opened them in the spring. They were so lethargic I just used a pair of welding gloves to move them under the shed. They eat tons of grasshoppers and keep the mice and rabbits from setting up shop under the shed so we like them.

That being said we had a good size rattler launch at us on a trail two years ago while jogging. I haven't heard any shakes on trails since though, we do keep our heads on a swivel if we are hiking on a cool day or morning and traveling through sunny spots.

I also have seen a number of snakes while fly fishing this year, down on river banks. Has happened a few times, not sure what type of snakes they have been with how quick they move.
'99 LC.

Yup. I'm not sure I agree with killing snakes and coyotes (or for that matter wolves and lions) on sight. Well as long as it's not a me-or-them situation.

It seems you open yourself to unintended consequences. As I understand it some years ago Larimer County had an issue with rabid foxes and so they exterminated them. Now the mountain parks have tons of rattlesnakes. Which is arguably worse.

But that does remind me of story about rattlers.

I was once riding at Coyote Ridge west of Loveland and came across not one but two rattlesnakes right on the trail tangled.

Me in my naivety thought I happened upon an intimate moment and gave them their space only to almost step right on a third I had not seen. Turns out it was two males fighting for the affection of the third.

I removed myself from the scene and took the very long way 'round that spot. Later research indicates seeing this is actually a pretty rare thing so in a way I feel lucky for the experience.

Snakes don't really bother me. I don't like rattlesnakes but I can appreciate them anyway. But happening on a bunch of snakes. Nope. Too Indiana Jones for me. I have an almost irrational fear of stepping on a rattlesnake nest out hiking or riding. I'm glad we don't see them often here. Unlike Larimer County where it could be almost guaranteed in certain seasons and times of day.
Last edited: Thursday at 8:37 AM
David
'08 Tacoma - Donna

timmbuck2 said:
Where are their arms and legs?
Click to expand...

this whole thread gives me the heebie jeebies... or the willy's, or,

Snakes don't bother me, but like @DaveInDenver, I'd rather not happen upon more than one at a time, nor would I like to come face-to-face with a rattler. I've had to move a few garter snakes from our front planter beds, as they terrify my wife, but I typically just move them to another part of the yard, because I hate rabbits and mice.

Here is a list of native Colorado snakes if anyone cares?

Snakes. Whether they thrill you or terrify you, these creatures provoke strong reactions in us. While many people are frightened by snakes, the fact remains that snakes play an important role in the ecosystems in which they are found. Have a mouse problem at home? There’s a snake for that...